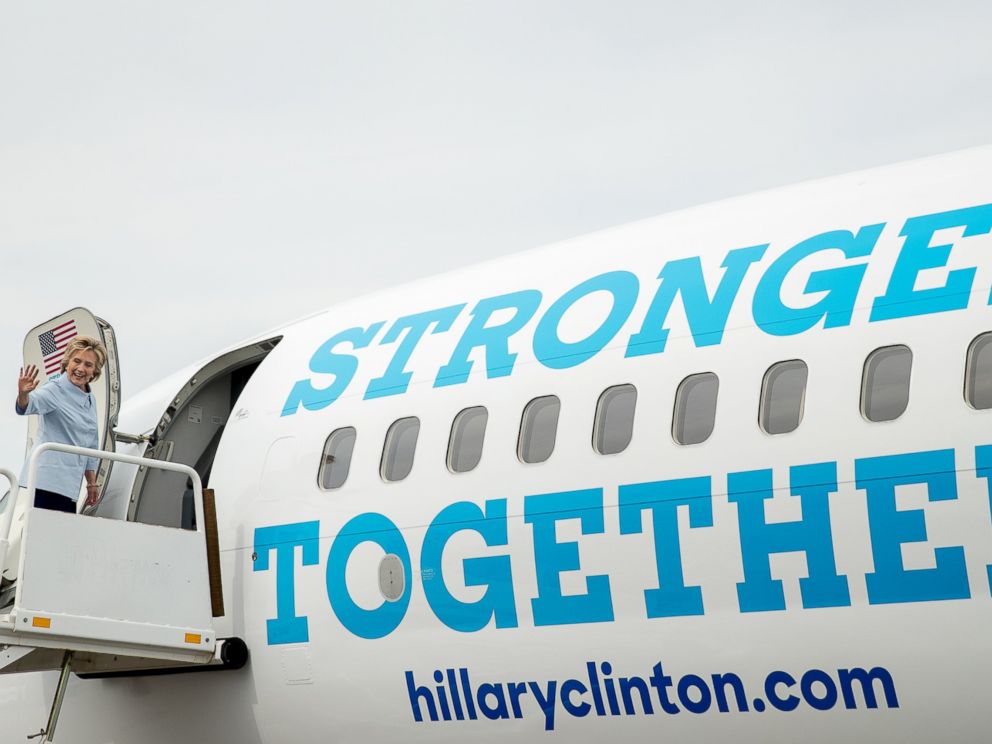 If it happened more often, it probably wouldn’t have seemed like such a big deal.

After months of not engaging with the traveling press that follows her across the country, Hillary Clinton ventured to the back of her new campaign plane three times on Monday — once just to say hello and twice to start and complete what resembled a news conference in the air (albeit in cramped quarters and with a television reporter sitting directly in front of her in the aisle).

The Democratic presidential nominee appeared relaxed and engaged as she fielded about a dozen questions from the media on a wide range of subjects, calling several reporters by name and leaning in to hear some queries better.

During the back and forth, Clinton weighed in on a Washington Post report about possible Russian efforts to undermine U.S. elections through cyberattacks. She accused her Republican opponent Donald Trump of a pro-Russian bias, saying he had “parroted” the words of its president, Vladimir Putin.

Clinton responded to critics of her handling of classified emails. The Democratic nominee vigorously defended the work of the Clinton foundation but wouldn’t say whether her daughter, Chelsea, would maintain an association with the charity if she is elected president.

And Clinton gamely talked about a pesky cough, which caused her to retreat to her section of the plane about 15 minutes into the session with reporters. After the plane landed here, she returned for several more minutes.

Clinton said the cough — which also surfaced during the start of a rally in Cleveland — was the result of seasonal allergies. Asked if the episode would feed into rumors circulating about her health, Clinton said: “I’m not concerned about the conspiracy theories. There are so many of them I’ve lost track . . . and so I pay no attention to them.”

What follows is run down of other things she said.

On the report of possible Russian government efforts to disrupt the U.S. elections:

“I’m really concerned about the credible reports about Russian government interference in our elections. The fact that our intelligence officials are now studying this and taking it seriously raises some grave questions. . . . When Putin was asked about it, he could barely muster the energy to deny it. . . . So we are facing a very serious concern. We’ve never had a foreign adversarial power be already involved in our electoral process.”

On whether the Russians appear to be trying to help Trump win the election.

“I often quote a great saying that I learned from living in Arkansas a lot of years: ‘If you find a turtle on a fence post, it didn’t get there by accident.’ I think it’s quite intriguing that this activity has happened around the time Trump became the nominee. Look, he very early on allied himself with Putin’s policies. To pull out of NATO, for goodness sakes. He furthermore has praised Putin. He seems to have this bizarre attraction to dictators, including Putin.”

On whether an inability to recall briefings related to email classifications indicate a “casual attitude” toward the way secrets were protected while she was secretary of state:

“No, not at all. . . . I went into to the State Department understanding classification. I’d been on the Senate Armed Services Committee for years before I was secretary of state. I take classification seriously. The fact that I couldn’t remember certain meetings, whether or not they had occurred, doesn’t in any way affect the commitment that I had and still have to the treatment of classified material.”

On whether she will succeed in closing the detention facilities at Guantanamo Bay even though President Obama has not:

“It’s been a goal of President Obama from the very beginning of his administration, and it should remain the goal of the next president. Guantanamo Bay, as I think we all recognize, became a symbol of a lot of the problems that were started under the Bush administration and which have not served us well in terms of relations around the world. So, I would like to see it closed.”

On whether Chelsea Clinton should no longer be involved with the Clinton foundation if she is elected president.

“We’ll reach that if I’m elected, but I just want to say how proud I am of the work the foundation has done. And it’s world-renowned for what it’s accomplished. Since my husband started it, 11.5 million people get low-cost HIV/AIDS drugs that would have had a hard time doing that. . . .They brought the price of malaria drugs down 90 percent so that is now readily available. They’re working on a program to get the antidote to heroin overdose into every high school in America, and there’s so much more.”

On whether having some of her employees go back and forth has contributed to “blurred lines” between the State Department and Clinton foundation:

“No, I don’t. Everything I did at the State Department I did in furtherance of America’s interests in our security. The State Department has said there’s absolutely no evidence of any kind of external influence, and I know that to be the fact, and I know that the people who worked with me were devoted as well to pursuing the foreign policy that the Obama administration set forth.”

On her prospects in the November election:
“We’re not taking anything for granted. . . . “We’re just going as hard and fast as we can.”