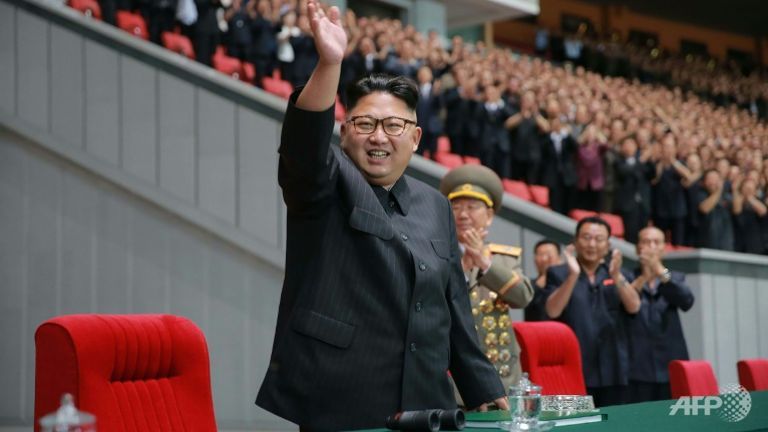 Kim supervised a drill by artillery units “tasked to strike the bases of the US imperialist aggressor forces in the Pacific operational theatre in a contingency,” Pyongyang’s KCNA news agency said.

“The units’ capability for fighting a real battle and the combat performance of the rockets were appreciated as perfect,” it said.

“He stressed the need to continue making miraculous achievements in bolstering up the nuclear force one after another in this historic year,” it added.

South Korea’s defence ministry said the tests were of Rodong missiles with a range of 1,000 kilometres (620 miles). It said they had been fired over the Sea of Japan (East Sea) without warning.

The Rodong is a scaled-up Scud variant with a maximum range of around 1,300 kilometres, bringing most of Japan within range.

The launches came as world leaders gathered in neighbouring China for the G20 summit, sparking condemnation from Japan and the United States, which blasted them as “reckless”.

In spite of tough global sanctions, Pyongyang continues to defy the international community’s calls for a halt to its weapons programme.

Those calls were set to intensify later Tuesday when the 15-member UN Security Council convenes in New York to consider a response to the latest in a series of tests, which has also included the detonation of a nuclear bomb in January.

Despite the global chorus of disapproval, Pyongyang was unrepentant.

Kim expressed “great satisfaction over the successful successive firing drill of the ballistic rockets”, which showed his military’s capability to launch “a preemptive attack on the enemies any time and from any place”, KCNA said.

The strategic artillery unit was “full of military might” to strike the US and its forces with “annihilating nuclear fire shower”, it said.

The North’s top newspaper Rodong Sinmun carried nine photos of the test, including one of a beaming Kim standing in front of a map surrounded by smiling officials.

Melissa Hanham, an expert on North Korea’s weapons programme at the Middlebury Institute of International Studies in California, said it was difficult to determine so far if there had been any technical progress.

“The most obvious difference from the last test is the change in warhead,” Hanham said.

That flew 500 kilometres towards Japan, far exceeding the range of the country’s previous sub-launched missiles.

Kim described the August test as the “greatest success” and said it put the US mainland within striking range.

The launch was widely condemned by the US and other major powers, but analysts saw it as a clear step forward for North Korea’s nuclear strike ambitions.

A proven submarine-launched ballistic missile system would allow deployment far beyond the Korean peninsula and a “second-strike” capability in the event of an attack on the North’s military bases.