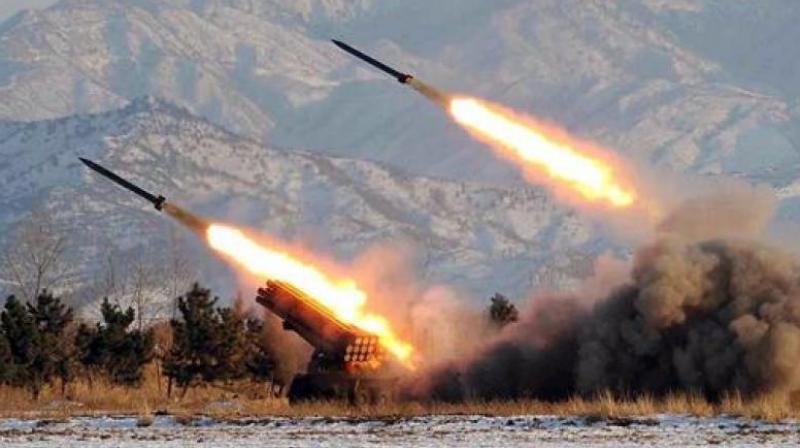 Officials said the launch was believed to be of mid-range Rodong missiles, and flew about 1,000 kilometers (620 miles) “without giving any prior navigational warning.”
It comes just under two weeks after Pyongyang test-fired a submarine-launched ballistic missile.
That missile entered Japan’s air defense identification zone, the first time that has happened. Monday’s launch also fired missiles into the Japanese defense zone, again without warning.

In a statement, the US said it “strongly condemns” the multiple launches, which came at a potentially embarrassing time for North Korea’s only real ally, China, which is currently hosting the G20 summit in Hangzhou.
From the summit, a senior US official said the launch was “reckless” and could pose threats to civil aviation and maritime commerce in the region.
The official said the US would raise its concerns at the East Asia Summit in Laos, which President Obama is scheduled to attend this week.
According to one analyst, the launches were timed for maximum effect.
“This is Pyongyang’s way of reminding everyone of their existence at a moment when all the parties are together, in a typically defiant, North Korean way,” John Delury, assistant professor at Yonsei University in South Korea, told CNN.
The launches also came hours after Chinese President Xi Jinping told his South Korean counterpart at the G20 that Beijing opposes the deployment of the United States’ THAAD missile defense system to South Korea.
“Mishandling the issue is not conducive to strategic stability in the region and could intensify disputes,” Xi was quoted as telling Park Geun-hye, according to a report from China’s official Xinhua News Agency.

The stated purpose of the THAAD system is to defend South Korea from missile attack from the North, but Beijing views it as an attempt to shift the regional power balance in favor of US allies.
Chinese Foreign Minister Wang Yi has previously said the deployment of the anti-missile system could jeopardize “China’s legitimate national security interests.”
“THAAD has a range that could hit weapons in China,” said Yvonne Chiu, an expert on military policy and diplomacy at Hong Kong University.
She added that China was understandably concerned “about having a US made, US run missile system in its backyard.”
Delury says that while the Chinese “recognize that something has to be done about North Korea,” they view the THAAD system as “killing a chicken with an ax.”
While the latest tests may seem to undermine Beijing’s anti-THAAD argument, Delury says it “will create more tension between the South Koreans and the Chinese,” which will benefit Pyongyang.
South Korea announced the deployment of the missile system in July but it is not yet in operation.
Source: CNN