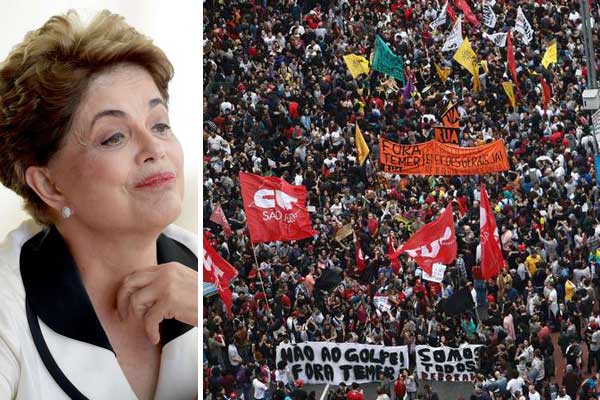 Tens of thousands took to Brazilian streets Sunday to support sacked leader Dilma Rousseff and protest the new government of Michel Temer, who has taken power and downplayed the protests. Demonstration organisers, who have rejected Temer’s ascendancy as a “coup”, said some 100,000 protestors filled the major artery Paulista Avenue, many holding banners that read “Out with Temer!” and “Direct elections now!”

The Senate voted Wednesday to convict Rousseff on charges of having illegally manipulated government accounts, stripping her of her office and replacing her with Temer, her bitter enemy and former vice president.

The protest ended with clashes between demonstrators and police, who fired gas bombs, according to the news website G1.

Temer, who after being sworn in promptly travelled to China for the G20 summit, said the protests were done by “small groups and predators.”

“It’s nothing more than that. Out of 204 million Brazilians, I don’t think it means much,” media outlets quoted Temer as saying.

The opposition dismissed the president’s figures: “The coup president of Brazil said that our demonstration would have 40 people. Here are those 40 people — we’re already almost 100,000 on Paulista Avenue,” said Guilherme Boulos, a member of one of the opposition groups that organized the protest.

The demonstration was held in the late afternoon so as not to interfere with the passing of the torch from the Paralympic Games, a Rio event due to start within three days — where another 2,000 people had demonstrated.