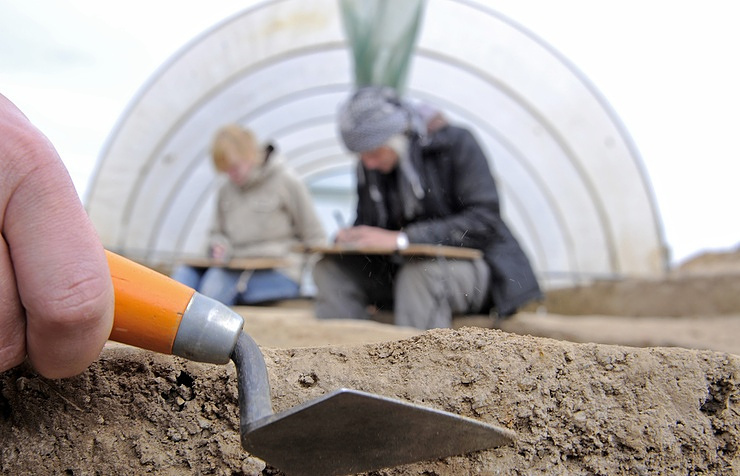 Russian archeologists dig up ancient bureaucrat and his official tool

Russian archeologists have found a burial tomb of a civil servant dated at around IV century BC, during their preparatory works for constructing a bridge across the Kerch Strait at the Taman peninsula.

An expedition by the Russian Institute of Material Culture discovered an agricultural settlement dating back to the Bosporus Kingdom era, there the remains of a bureaucrat responsible for recording agricultural production was found buried together with a measuring cup for either wine or grain

“Archaeological digs were carried out on an area of almost 70,000 square meters, which made it possible to study in detail a large ancient residential, commercial and funeral area from a wide time range from the late archaic era to the late medieval period,” the expedition chief, Sergei Soloviev told TASS.

He emphasized that in addition to a predictable set of items like glassware, household items and jewelry, they were able to recover a Sinop measuring container with an official city stamp that certifies its volume.

“The measuring cup is an interesting detail, from which we can assume that a family member that owned the catacomb could have served as a measurer of grain or other agricultural products,” Soloviev explained, adding that this was a common occupation for area residents.

He said that in one of the ancient tombs not only did archeologists find a representative set of items, such as ceramic vessels, stone, glass and metal jewelry and household items, but a Sinop-produced measuring container with an imprinted stamp of city officials, to verify its scope was dug up as well. “That measuring vessel is an interesting nuance of life at that time and it can be assumed that some members of the family that had owned this catacomb, could have served as officers charged with weighing grain or some other agricultural products, which was the main occupation of the residents of the surveyed settlements.” Soloviev explained.

He indicated that based on what was found inside the graves, a lot can be determined about the residents’ professions and material status.

Historians are certain that the grey clay pitcher was an official measuring tool for something, despite the fact that there are no marks on it. The only writing is the rectangular stamp with the names of the Greek officials that were in charge of the market, and next to it, a trident emblem.

Soloviev noted that if it was not for grain, then the officials could have measured wine that was to be sold to the residents, rather than take wine in from them, because that product was not made on the peninsula at that time.