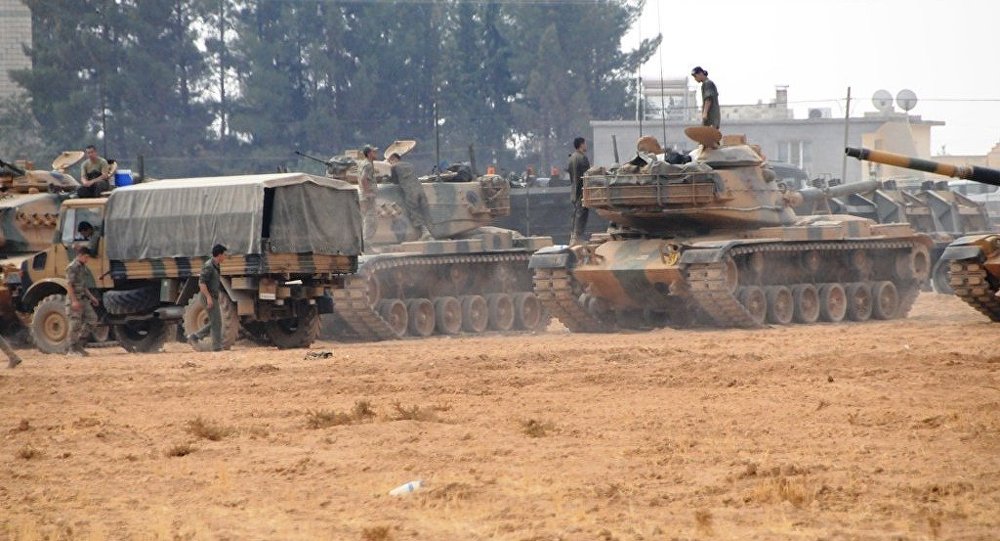 The Turkish operation in Jarablus shows that Ankara is changing its stance towards Syrian President Bashar Assad and is ready to cooperate with the key regional players, including Moscow and Ankara, an analyst said.

A week ago, Turkey launched a military operation dubbed Euphrates Shield in the northern Syrian city of Jarablus. The operation has been repeatedly criticized in the media and by experts, with some saying that Ankara could be dragged into a quagmire if Turkish forces stay in Syria for long.

Semih Idiz, author of many analytical pieces on foreign affairs, noted that Turkey could stay in Syria for a long time. “The government announced that the operation would last as long as needed. Thus, I can’t rule out that Turkish forces may stay in Syria for long, at least, as long as the situation in Syria is unstable,” Idiz said in an interview with the Turkish newspaper BirGun. According to the expert, the Jarablus operation has several goals. The first goal is to destroy militants of the Daesh terrorist group. The second is to push Kurdish forces to the West from the Euphrates. Then, Turkish forces will try to establish a controlled safe region, from Jarablus to Azaz, for refugees and at the same time to create a buffer zone between Turkey and Syria.

When the operation started Turkish troops and tanks received aerial support from an international coalition led by the United States. Washington supported Ankara’s combat actions against the Kurds despite the fact that Kurdish forces have long been a US ally in the fight against Daesh in Syria.

“Of course, the US is not happy with the conflict between Turkey and Kurds. Washington is facing a dilemma because the US is glad that Turkey is fighting Daesh,” Idiz said. He added that currently Turkey is also supported by Russia and Iran. Moscow and Tehran has long insisted on the need to preserve Syria’s territorial integrity.

“If Ankara has changed its stance towards [Syrian President Bashar] Assad then it means that Iran and Russia are close to a compromise with Turkey on the Kurdish problem,” the expert suggested. Idiz also commented on the dangers Ankara could face during the operation.

“Of course, there is a risk factor. Some say that Turkey may be dragged in a quagmire. It’s true because such operations always have risks. At the same time, the West is unlikely to interfere because Turkey is fighting Daesh in Syria,” the expert said.

Arif Keskin, a specialist in Middle East issues, noted that the outcome of the Jarablus operation will depend on alliances Turkey will form.

“Ankara couldn’t have started a military operation in Syria independently. Syria may not become a quagmire if Ankara manages to form alliances with the US, Russia, Iran and the Syrian government. The operation is not sending a signal to Damascus and is not aimed at overthrowing Assad,” Keskin told BirGun.

However, if the goals of the offensive are incorrect the operation could fail, he warned.

“If Turkey abandons some of its regional ambitions, sets pragmatic goals and forms a well-organized alliance Syria will not turn into a quagmire. The operation could even be successful. Turkey should consider the regional balance of power which is maintained by the US, Russia and Iran,” Keskin said. Keskin continued: “What is happening now could change the Turkish policy in the region. Ankara is now turning away from Washington and reaching to Moscow and Tehran. The Jarablus operation could strengthen Turkish ties with Russia and Iran.”