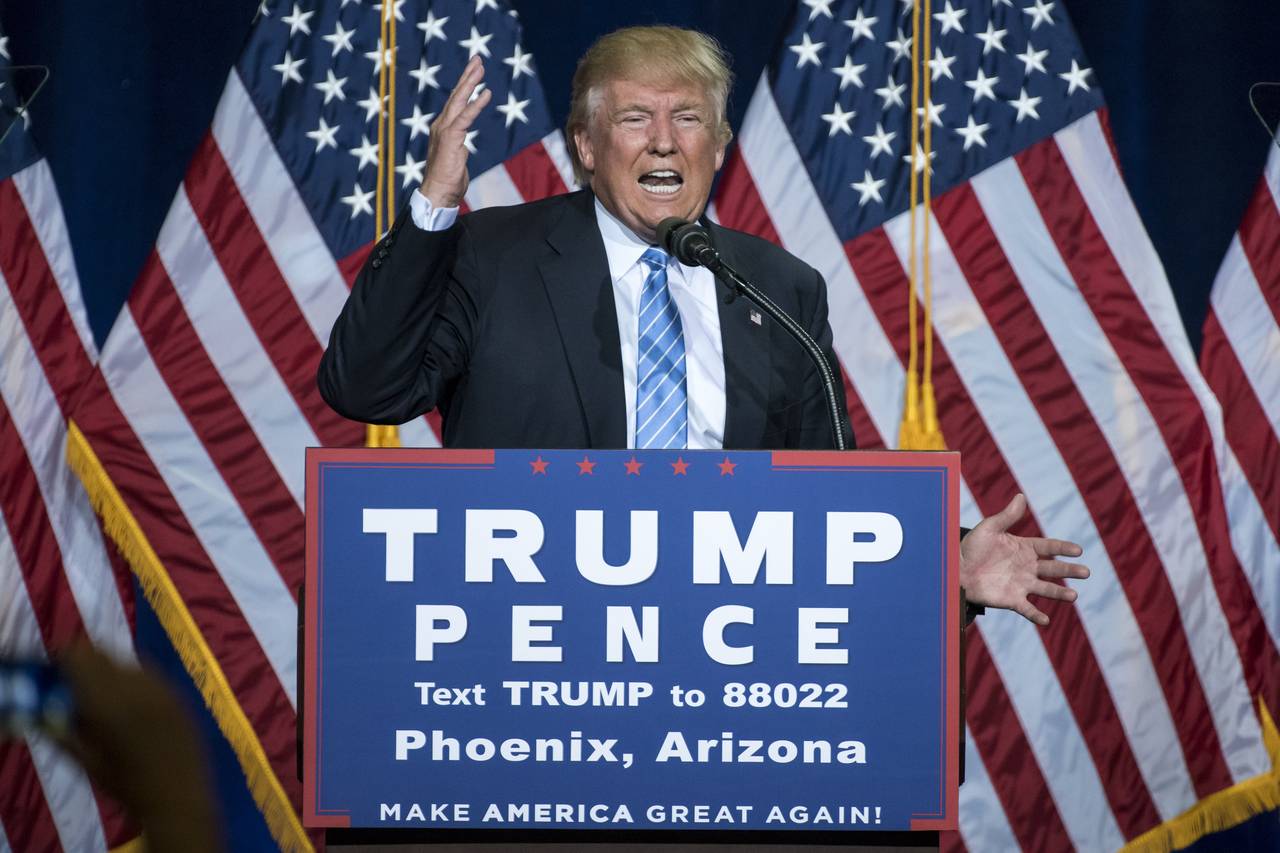 As Donald Trump arrived in Phoenix late Wednesday, fresh from a visit to Mexico City’s presidential palace, he had in his hands a big immigration speech that omitted the usual line that Mexico would have to pay for his proposed wall along the U.S. southern border.

Just after landing, though, Mr. Trump discovered that Mexican President Enrique Peña Nieto had tweeted that he had told the Republican presidential nominee during their private meeting earlier that day that his country would refuse to pay for the wall.

Mr. Trump was peeved that Mr. Peña Nieto had gone public with the fact that the Mexican president had broken what Mr. Trump considered a deal to keep the question of paying for the wall off the table at their initial meeting.
So Mr. Trump hurriedly inserted a new sentence in his immigration speech, and he soon boomed out from the podium his traditional declaration that the wall would be paid for by Mexico—adding, “They don’t know it yet but they’re going to pay for the wall.”

“I had no choice,” Mr. Trump said in an interview on Thursday. But he also said of the Mexican president, “I liked him very much.”

All told, Wednesday was a day of exceptional twists and turns, spanning multiple time zones and two countries, on the trade and immigration issues that have become signatures of the Trump presidential campaign.

The day wasn’t only one of the most unusual in the campaign, but one of the most controversial. Many Mexicans were incensed that their president invited Mr. Trump. A poll published in the Reforma newspaper Wednesday showed 85% of Mexicans disapproved of the invitation, and 72% thought it weakened the Mexican government.

As the dispute between Mr. Trump and Mr. Peña Nieto over paying for the wall escalated,John Podesta, the chairman of DemocratHillary Clinton’s presidential campaign, tweeted late Thursday: “What a mess.”

The high-stakes day, which seemed to have been put together at the last minute, actually had been discussed internally for weeks, according to Trump campaign advisers. The campaign saw the meeting in Mexico as a chance to appeal to moderate voters, and the immigration speech as a chance to motivate Mr. Trump’s core voters.

Jared Kushner, the real-estate investor married to Mr. Trump’s daughter Ivanka, initially floated to his father-in-law the idea of a trip to Mexico, Mr. Trump said. Mexico, of course, had been a central and controversial topic since the day Mr. Trump announced his campaign with a speech in which he accused it of sending the U.S. its criminals and “rapists.”

Meanwhile, Mr. Peña Nieto was asked by media in his country if he would ever meet with Mr. Trump. He ultimately responded by sending invitations to both Mr. Trump and Mrs. Clinton last week. The former secretary of state hasn’t accepted, but Mr. Kushner moved quickly to accept on Mr. Trump’s behalf and orchestrate logistics, from security to protocol.

At the same time, Mr. Trump’s team and the candidate himself suggested in media interviews that he was “softening” his immigration stance, particularly on deporting illegal immigrants already in the U.S.

As the campaign set Wednesday’s speech in Phoenix as the time when Mr. Trump would lay out his detailed immigration platform, it also concluded the plan to meet the Mexican president. Over last weekend, the two sides drew up a list of items for discussion for this “initial meeting,” according to former New York Mayor and current Trump adviser Rudy Giuliani.

Both sides agreed on several points—the need to reduce crime, including drugs and guns, each country’s right to protect its “sovereign border” by whatever means, and that the North American Free Trade Agreement should be improved to benefit each country, senior Trump advisers said.

One point on which they agreed to disagree: who would pay for a wall. Trump advisers said the two sides decided they wouldn’t discuss the topic of payment in their first meeting, to ease the process of getting acquainted and to focus on the bigger picture.

Mr. Trump flew to Mexico City with a small team, landing Wednesday morning. They flew by helicopter into the grounds of presidential palace, where they were met by Mr. Peña Nieto. Messrs. Trump and Peña Nieto sat in two wingback chairs with their advisers on either side. Mr. Trump brought into the meeting Mr. Giuliani, Alabama GOP Sen. Jeff Sessions, an early supporter and hard-liner on immigration, and Mr. Kushner.

The hourlong meeting began on a cordial tone, as the two men agreed on areas in common, such as an American-Mexican task force to go after drug cartels, similar to one that the U.S. implemented with Colombia, Mr. Giuliani said. Indeed, it appeared to Mr. Trump that the two men could be allies, not adversaries, on some issues, according to one attendee.

But Mr. Peña Nieto surprised Mr. Trump when he stated flatly that his country wouldn’t pay for the wall. Immediately, Mr. Giuliani responded for Mr. Trump, “That’s off the table.” With that, Mr. Trump moved to another topic.

A person close to Mr. Peña Nieto said that “since there was such a clear disagreement in preparatory conversations over issues about the wall and its payment, both parties agreed not to discuss them at the meeting, and instead talk about other topics, such as the great contribution that the Mexican community makes in the U.S., illegal drugs and weapons trafficking, bilateral trade, within North America and the rest of the world.” The person added: “Before the conversation began, Mr. Peña Neto reiterated to Mr. Trump that Mexico won’t pay for any wall, and as agreed, they discussed other topics.”

At the press conference after the meeting, the Trump campaign got the photo op it wanted of Mr. Trump and a world leader. The size of the press turnout pleased the candidate. When asked if they discussed the GOP nominee’s proposed wall, Mr. Trump said they did, but not who would pay for it. Mr. Peña Nieto stayed silent. It wasn’t until landing in Phoenix that Mr. Trump saw the Mexican’s tweet about not paying.

Mr. Trump and his team were stunned, advisers said. News reports were questioning why Mr. Trump didn’t discuss the payment issue at the joint press conference.

“I have to add back the line that Mexico will pay,” Mr. Trump said, according to the people with him, adding that he couldn’t let that tweet go unanswered. Mr. Giuliani, a lawyer and onetime prosecutor, said he told Mr. Trump that the talking-points deal was effectively breached by the tweet, which gave Mr. Trump the right to talk about his insistence that Mexico would pay for the wall.

Once Mr. Trump hit the Phoenix stage, he laid out a 10-point immigration platform, including the wall: “On day one, we will begin working on an impenetrable physical wall on the southern border,” Mr. Trump said. “We will use the best technology, including above-and-below-ground sensors, towers, aerial surveillance and manpower to supplement the wall, find and dislocate tunnels, and keep out the criminal cartels—and Mexico will pay for the wall.”