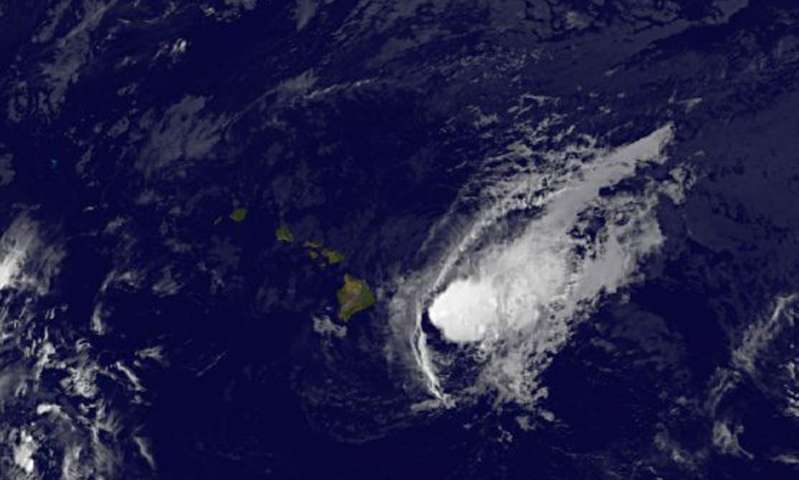 Hurricane Madeline was a powerful Category 4 storm that has now weakened to a Category 1 storm as it nears the Big Island of Hawaii. NOAA’s GOES-East satellite has been continuously capturing imagery of the storm that showed the structure has been weakening. Two NASA satellites confirmed that the storm was weakening.

Visible and infrared imagery from NOAA’s GOES-West satellite was compiled and made into an animation showing the progression and strengthening then weakening of Madeline between Aug. 29 and 31. The animation was created at the NASA/NOAA GOES Project at the NASA Goddard Space Flight Center in Greenbelt, Maryland.

At 7:20 a.m. EDT (1120 UTC) Infrared data from the Moderate Resolution Imaging Spectroradiometer aboard NASA’s Aqua satellite showed cloud tops northeast of the center as cold as minus 70 degrees Fahrenheit (minus 56.6 degrees Celsius). Cold cloud tops indicate the area of strongest storms that stretch highest into the troposphere. The higher they are, the colder the air temperature.

At 11 a.m. EDT (1500 UTC) on Aug. 31, Forecaster Birchard of NOAA’s Central Pacific Hurricane Center (CPHC) noted “After a period of rapid intensification that ended early Tuesday (Aug. 30), Madeline has been rapidly weakening since Tuesday afternoon, primarily due to increased vertical wind shear. Latest satellite images show that the cyclone’s structure has degraded significantly, with the center estimated to be on the southwest side of the cold cloud tops.”

In imagery from NASA-NOAA’s Suomi NPP satellite taken at 7:29 a.m. EDT (1129 UTC) there was an indication that the low-level center of Madeline was becoming partially exposed to outside winds, and when NASA-JAXA’s Global Precipitation Measurement mission or GPM core satellite passed overhead around the same time, GPM data confirmed the exposed center.

At that time the center of Hurricane Madeline was located near 18.7 degrees north latitude and 153.6 degrees west longitude. That’s about 120 miles (195 km) east-southeast of Hilo, Hawaii. Madeline is moving toward the west near 12 mph (19 kph) and this general motion is expected to continue for the next couple of days. Maximum sustained winds are near 75 mph (120 kph) with higher gusts. Steady weakening is forecast during the next 48 hours, and Madeline is forecast to weaken to a tropical storm later today or tonight. The estimated minimum central pressure is 990 millibars.