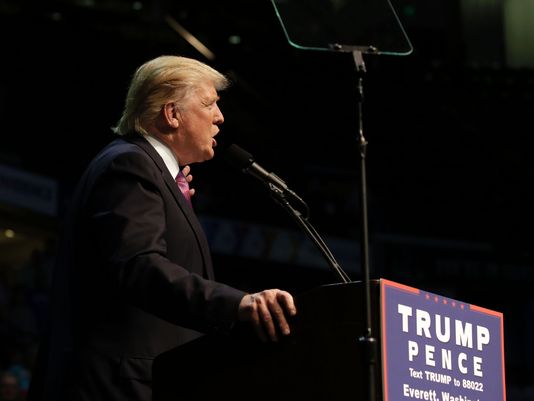 Over the past week, Republican presidential nominee Donald Trump has twisted the facts on illegal immigration, and the plans of his opponent,Hillary Clinton, as he struggled to explain what he would do with the estimated 11 million people who are living in the U.S. illegally.

• Trump was wrong in saying that “using the existing laws, millions of people are deported every year.” The peak for removals based on deportation orders dating to 1892 was 435,498 in fiscal 2013.

• Trump wrongly said “nearly 200,000 illegal immigrants” booked into Texas jails “were responsible for more than half a million criminal offenses.” State data show 130,000 were arrested over a five-year period, and their convictions, over their lifetimes, totaled 157,000.

• Trump said that “nobody even knows” if there are 11 million immigrants in the country illegally, adding that the number could be 30 million or 5 million. But several independent estimates agree on the 11 million number, and experts say it’s impossible for the number to be as high, or as low, as Trump says.

• Trump exaggerated when he said Clinton will “close down detention centers for border crossings, meaning she will have an open southern border that will bring … crime and destruction.” Clinton has said she would replace privately run centers with government-run facilities.

• Trump claimed Clinton’s immigration plan “would functionally end enforcement of visa overstay rules — another open border decree.” But her plan does not address visa overstays. To the contrary, Clinton supported a 2013 Senate bill that included a provision to create a new system to track, locate and remove visa overstays.

• New Jersey Gov. Chris Christie, a Trump supporter, falsely said that “everybody … whether you’ve been a criminal or not” would become “American citizens” under Clinton’s plan. In fact, Clinton has specifically said she would deport “violent” or “dangerous” criminals, “terrorists” and “anyone who threatens our safety.”

Trump came under criticism even from some of his supporters when he appeared to soften his position on deporting all 11 million or so people who are estimated to be living in the U.S. illegally. Trump told Fox News’ Sean Hannity on Aug. 24 (at about the 3:40 mark) that “everyone agrees that we get the bad ones out,” but then he left open the possibility that some who have been living in the U.S. for years without incident would get to stay.

“They’ll pay back taxes, they have to pay taxes. There’s no amnesty, as such, there’s no amnesty, but we work with them,” Trump told Hannity, contrary to his earlier position that he would have a “deportation force” to remove all 11 million people. Trump may clear up the confusion in a speech he said he will deliver Aug. 31.

As he dealt with the deportation issue in recent days, Trump gave several speeches and interviews that touched on the topic of immigration. We review some of his claims here.

Trump told CNN’s Anderson Cooper in an Aug. 25 interview that “using the existing laws, millions of people are deported every year.” That’s false, and not even close.

DHS defines a “removal” as “the compulsory and confirmed movement of an inadmissible or deportable alien out of the United States based on an order of removal.” The peak for removals processed by the Customs and Border Protection and Immigration and Customs Enforcement agencies, going back to 1892, was 435,498 in fiscal 2013.

Trump may have been thinking of a time when the total number of “removals” and “returns,” together, approached 2 million. That was more than a decade ago, though.

DHS defines a “return” as “the confirmed movement of an inadmissible or deportable alien out of the United States not based on an order of removal.” In other words, a return occurs when an apprehended immigrant leaves the U.S. voluntarily before being ordered to do so through a formal removal proceeding.

At a campaign rally in Austin, Trump took a page out of former Texas governor Rick Perry’s playbook and misrepresented Texas crime data on immigrants. Trumpclaimed the numbers pertained to “illegal immigrants,” but they actually pertain to all immigrants, both legal and illegal.

Trump, Aug. 23: “According to the Texas government, nearly 200,000 illegal immigrants were booked into Texas jails between 2011 and 2016. Collectively, those arrested were responsible for more than half a million criminal offenses, including 1,055 homicides, 5,516 sexual assault charges and more than 50,000 charges of either burglary or theft. Not going to happen folks. We’re not going to let it happen to our country. It’s enough.”

Trump is citing, incorrectly, figures from the Texas Department of Public Safety, which has a webpage on “Texas Criminal Alien Arrest Data.” Just as Perry did when he cited such data in 2014, Trump says the statistics are about illegal immigrants. But a “criminal alien,” in the Texas DPS’ wording, is any immigrant who was charged with a crime — and the webpage, which contains all of the numbers Trump used, makes that clear.

Also, the “more than half a million criminal offenses” Trump cites are charges, not convictions, over those immigrants’ lifetimes.

Trump exaggerates when he says that “nearly 200,000 illegal immigrants were booked into Texas jails between 2011 and 2016.” Most, but not all, of the immigrants arrested over those years were identified as being illegally in the country. As the Texas DPS webpage says: “Of the total criminal aliens arrested in that timeframe, over 130,000 or 66% were identified by [the federal Department of Homeland Security] status as being in the US illegally at the time of their last arrest.”

The Texas Department of Public Safety compiled this data through fingerprint submissions to DHS under its “Priority Enforcement Program.” Under PEP, local and state law enforcement submit fingerprints, which are screened by the FBI and Immigration and Customs Enforcement. DHS says the goal is to “take custody of individuals who pose a danger to public safety before those individuals are released into our communities.”

Trump goes on to say that the immigrants arrested between 2011 and 2016 “were responsible for more than half a million criminal offenses,” including homicides and sexual assaults — but these are arrests, not convictions. Also, the Texas DPS notes these arrests occurred “[d]uring their criminal careers.” So the number of offenses goes beyond the 2011-2016 time frame.

The DPS doesn’t give a breakdown for the number of those charges for illegal and legal immigrants, and DPS spokesman Tom Vinger told us that information wasn’t readily available and would require a public information request. We have submitted that request and will update this article if we obtain those numbers.

This means the numbers that Trump gives for homicide, sexual assault and burglary/theft charges don’t all pertain to immigrants living in the country illegally, as he claims.

These charges or arrests of immigrants are more than double the number of convictions. The Texas DPS webpage says that while there have been 526,000 arrests, over the “criminal careers” of these individuals, there have been “over 236,000 convictions” resulting from those charges. DPS does have a breakdown for how many convictions pertain to immigrants in the country illegally: 157,000.

So, the 130,000 individuals arrested between 2011 and 2016 in Texas — who were identified by fingerprints by the Department of Homeland Security as being illegally present in the country — were convicted of 157,000 crimes over their lifetimes in Texas.

We also have requested a breakdown on the types of convictions for illegal and legal immigrants. The Texas DPS notes: “Texas arrestees who have not had interaction with the DHS which resulted in the collection of fingerprints are not included as their identity cannot be biometrically verified by DHS.” So there may be more immigrants, of varying legal status, who were arrested in Texas but not included in these figures.