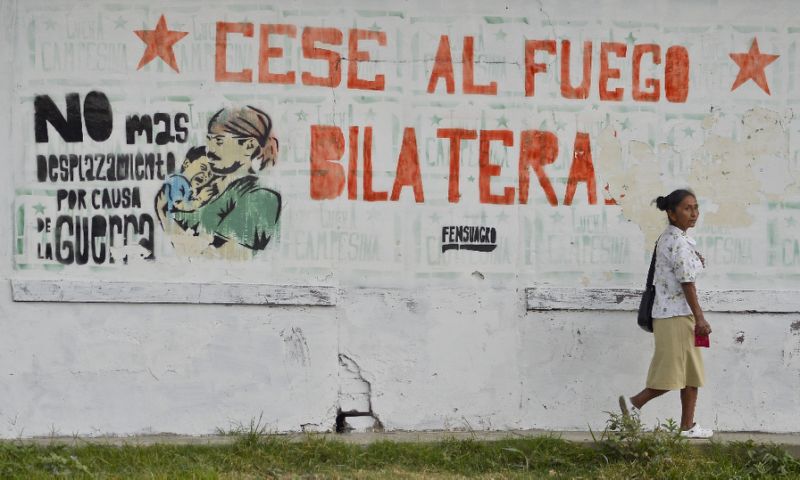 “This August 29 a new phase of history begins for Colombia. We silenced the guns. THE WAR WITH THE FARC IS OVER!” Santos wrote on Twitter one minute after midnight.

A message from the official FARC account at the same time was more restrained: “From this moment on the bilateral and definitive ceasefire begins.”

In a declaration to reporters in Cuba, where peace talks were held, Jimenez said that he ordered all commanders and units, “and each one of our combatants to definitively cease fire and hostilities against the Colombian state” starting at midnight.

The ceasefire is the first in which both sides are committed to a definite end to the fighting.

“The ceasefire is really one more seal on the end of the conflict. It is the test of fire,” said Carlos Alfonso Velazquez, a security expert at the University of La Sabana.

battled in the jungles in what is considered Latin America’s last major civil armed conflict.

Santos and Jimenez are due to sign a final, full peace agreement sometime between September 20 and 26.

The end of hostilities will be followed by a six-month demobilization process.

Starting Monday, the FARC’s estimated 7,500 fighters will head to collection points to surrender their weapons under UN supervision.

Guerrillas who refuse to demobilize and disarm “will be pursued with all the strength of the state forces,” Santos told El Espectador newspaper.

Before the demobilization, the FARC will convene its leaders and troops one last time before transforming into “a legal political movement,” according to a statement published on Saturday.

On October 2, Colombians will vote in a referendum that Santos hopes will endorse the peace agreement.

“A victory for the ‘Yes’ vote will be a mandate from citizens for future governments,” Santos was quoting as saying by El Espectador.

“The plebiscite will grant the political legitimacy that is needed.”

He said the exact question that will be put to voters in the referendum would be announced “in the coming days.”

“We are on the verge of perhaps the most important political decision of our lives,” Santos said in a speech on Saturday.

The territorial and ideological conflict has drawn in various left- and right-wing armed groups and gangs.

Efforts to launch peace talks with a smaller rebel group, the National Liberation Army, have yet to bear fruit.

But with the FARC ordering a ceasefire the conflict appears to be reaching an end.

“To the soldiers, naval personnel and air force pilots, police and state security and intelligence agencies, we wish to express our clear and definite will for reconciliation,” said Jimenez, known by the nom-de-guerre Timochenko, in Havana.