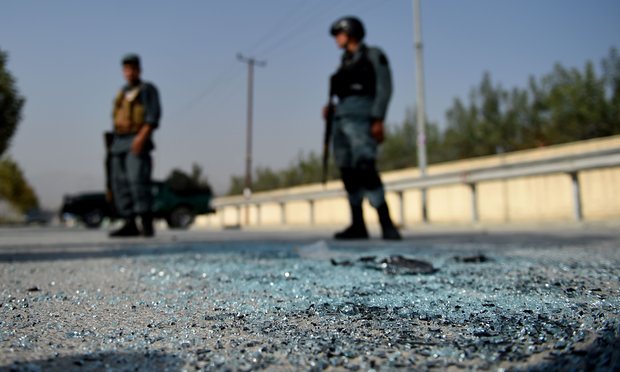 On Wednesday, beginning her second semester at the American University ofAfghanistan, Narges Mohammadi was on her path to something unattainable for most girls from her rural Ghazni province: a university degree and, hopefully, a career.

Her father, defying protests from his own mother, encouraged his daughter’s dreams to become a fashion designer and start a factory employing women. He even sent her to the capital to study business administration.

“He is open-minded,” Mohammadi said. “He loves me too much.”

On Wednesday, Mohammadi’s evening English class was about to start when a deafening explosion broke the classroom windows and sent everyone scrambling for cover. The students ran for the corridor, but turned around at the sound of another explosion.

Barricading the door with tables and chairs, they formed a rope out of headscarves to climb out the second-floor window. When a hand grenade hit the door, Mohammadi jumped. She hit the ground and broke her leg and several teeth. Ears ringing, she managed to crawl on her forearms to safety and was later evacuated.

At least 16 people were killed when terrorists attacked the American University in Kabul, including eight students and two professors. Mohammadi was among 36 students and staff injured. No group has claimed responsibility, but Afghanpresident Ashraf Ghani said the attack was planned in Pakistan.

An elite institution, the university is an icon of cooperation between Afghanistan and the US. It attracts one of Afghanistan biggest assets: young people committed to building a future here, despite intimidation from militants and threats of war. Half its students are women. It has also long been seen as a possible target for Islamic militants.

Among those who died were newly admitted Alina, 18, whose father was still in Pakistan retrieving her transcripts, Naqeb Khpalwak, an Oxford PhD candidate who had returned home in 2013 to teach law and Sami Sarwari, a talented musician on a scholarship who arrived at the university on Tuesday, and posted on Facebook: “I’m in. Looking forward to a beautiful and bright future.”

The attackers struck in the evening when the university is full of students, many of whom rush to class after finishing daytime jobs. One of them, Helmand-born Rahmatullah Amiri, 31, attends political science classes at night, and researches for an NGO at day. He came to Kabul five years ago to break free, like Mohammadi, of the confines of rural life.

After the explosion, Amiri guided classmates towards an emergency exit. When they reached the gate, he saw a gunman in the darkness, who began shooting. A bullet struck Amiri’s arm and stomach. Another fractured his leg.

Amiri’s research takes him to Afghanistan’s most dangerous areas: in 2010, he travelled to Marjah in Helmand to witnessone of the largest operations of the war. Journalists embedded with foreign troops. Amiri embedded with the Taliban.

“To witness history, you have to take risks,” he said. Faced with the irony of surviving battle, but nearly dying in the classroom, he managed a wan smile.

Amiri stands out at the university, with his hair and beard long and untidy in the style of his southern village. Every day on campus he would get a cappuccino and a doughnut, and work outside on his laptop.

“It was like a dream come true,” he said. The university, opened in 2006 on principles of critical thinking, and gender and religious equality, rubbed some the wrong way.

But Amiri, a devout Muslim, said, “Being a student of Islam, I haven’t come across a single thing [in the religion] that should stop me from studying at this university. If I had, I wouldn’t have gone. This university has improved the lives of people.”

Thursday morning, president Ghani visited injured students at Kabul’s Emergency hospital. When he reached Narges Mohammadi’s bed, “He told me, ‘I want you to go back to university’,” she said. She will, though she has yet to ask her father if he still thinks it’s a good idea.

“He was just crying the whole time when he saw me,” she said.