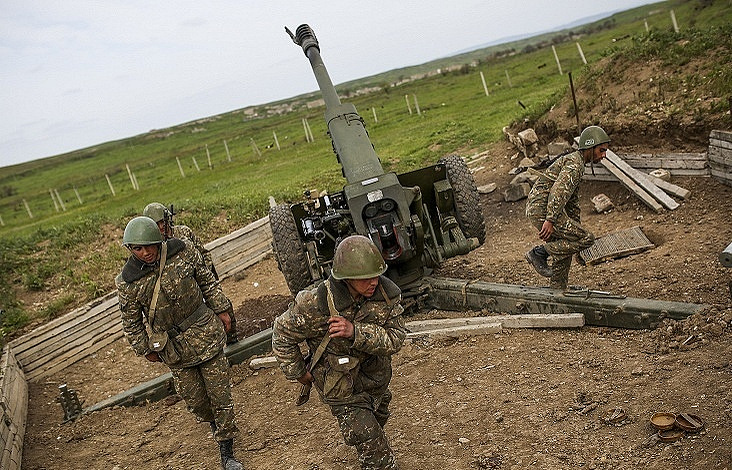 The Armenian armed forces have violated the ceasefire on various sectors of the frontline in the Nagorno-Karabakh conflict zone 13 times over the past 24 hours, including with the use of heavy machine guns, the Azerbaijani Defense Ministry reported today.

According to its version, “Azerbaijani army positions were shelled from the territory of Armenia and from counter-positions in the areas adjacent to Nagorno-Karabakh” controlled by the Armenian side.

The situation along the line of engagement of the conflicting parties in Nagorno-Karabakh deteriorated dramatically overnight to April 2. Following fierce armed clashes along the contact line, the parties to the conflict accused each other of violating the truce.

On April 5, Russia mediated a meeting between Colonel-General Najmeddin Sadykov, the chief of the Azerbaijani Armed Forces General Staff, and Colonel-General Yuri Khachaturov, the chief of the Armenian Armed Forces General Staff, that took place in Moscow. The sides agreed to cease the hostilities on the line disengaging the Azerbaijani and Armenian troops in Nagorno-Karabakh. The defense ministries of Azerbaijan and Armenia announced a ceasefire on the contact line as of 11:00 Moscow Time the same day. Ever since, the parties occasionally report brief exchanges of fire along the contact line.

A trilateral statement adopted at the meeting of the Russian, Azerbaijani and Armenian presidents in St. Petersburg on June 20 confirmed the parties’ commitment to normalizing the situation along the contact line in Nagorno-Karabakh.