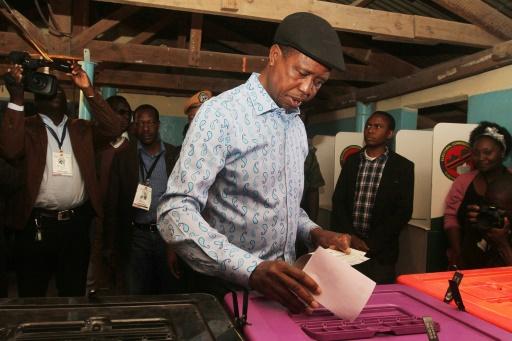 Zambia’s incumbent president Edgar Lungu was declared the winner of a closely-fought election on Monday but the victory was immediately challenged by his main rival.

Election commission chief Esau Chulu announced Lungu was “duly elected” after releasing the final results from Thursday’s election, which put the president ahead of his main rival Hakainde Hichilema by 2.5 percent or around 200,000 votes.

“We are going to take up this matter legally,” Jack Mwiimbu, legal specialist for the opposition United Party for National Development (UPND), told reporters after the results were announced.

“We have overwhelming evidence of manipulations in the figures.”

But the ruling Patriotic Front’s (PF) secretary general Davis Chama, who popped several bottles of Champagne at the Mulungushi International Conference Centre where the results were announced, laughed off allegations of vote rigging.

“Those are cry-babies who always complain each time there is an election. We have taught them a lesson and this is the end of the UPND,” said Chama.

Lungu’s supporters poured out into the streets sporting party paraphernalia to celebrate the win.

The weeks running up to the election were tense and clashes between PF and UPND supporters left at least three people dead. But election day was largely peaceful.

Lungu polled over 50.35 percent or 1.86 million votes against Hichilema’s 47.63 percent or 1.66 million, according to the results released four days after the vote.

Hichilema on Sunday charged that unexplained delays in releasing the results were a clear sign of fraud to produce a win for Lungu’s PF.

The electoral commission had initially said the results would be announced within 48 hours of the close of voting.

“Clearly this is rigging an election, with the collusion of managers at the Electoral Commission of Zambia or commissioners,” said the wealthy businessman, who was making his fifth bid for the presidency.

The United National Independence Party (UNIP) which was set up by the southern African country’s founding president, Kenneth Kaunda, also said it would also challenge the results.

The results took some by analysts by surprise.

“Given the current state of the economy. I didn’t expect (Lungu) to win. He hasn’t done well in the area of governance of and restoring confidence in the economy,” said Oliver Saasa, a political and economic analyst.

Copper-rich Zambia is usually known for its relative stability, despite the clashes in the run-up to the vote.

“I would be surprised to see violence breaking out, if it happens it would be isolated case, just like we saw during the campaign period. Zambians are generally peaceful,” said Saasa.

The United States congratulated Lungu on his victory and called on all candidates “show leadership in respecting the official results”.

It urged the public to use the law to seek any redress.

But Washington also noted concerns by international election observers of “increased violence and restrictions on freedom of press and assembly” in the runup to the vote.

“We hope that the government will address these concerns in the context of future elections to strengthen Zambian democracy,” State Department spokeswoman Elizabeth Trudeau added.

During Thursday’s vote, Zambia’s electorate had also cast ballots in parliamentary and municipal elections as well as in a constitutional referendum.

Lungu has been in office for just 19 months after he took power in a snap election following the death in office of president Michael Sata, again beating Hichilema by a tiny margin.

He has now been re-elected for a full five-year term.

The falling price of copper, the country’s key export, has badly damaged the economy with thousands of jobs lost in mining and inflation soaring to over 20 percent.