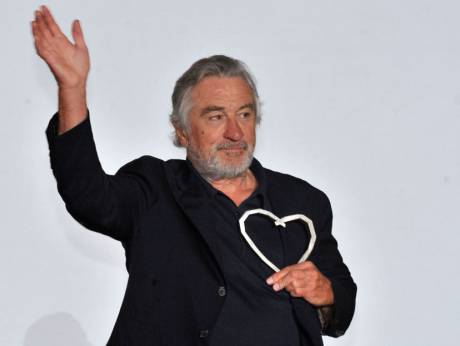 US actor Robert De Niro was on Friday opened the Sarajevo film festival, which honoured the star with a lifetime’s achievement award.

The 72-year-old, who has starred in more than 100 films, received the festival’s “Heart of Sarajevo” award in front of 3,000 festival goers at an open-air viewing of Taxi Driver.

De Niro earned an Oscar nomination for the 1976 film directed by Martin Scorsese.

More than 200 films will be screened at the 22nd edition of the festival, which runs until August 20 in the Bosnian capital.

Created as an “act of resistance” during the 1992-5 siege of Sarajevo, the festival regularly attracts big names, with Angelina Jolie, Brad Pitt, Juliette Binoche and Jeremy Irons among those who have attended in recent years.

Other highlights of this year’s festival include Scream for me Sarajevo, a documentary telling the story of a 1994 concert given by Iron Maiden singer Bruce Dickinson during the siege.

British director Stephen Frears was also due to receive a Heart of Sarajevo for his “extraordinary contribution” to the art of cinematography.

Eight feature films will meanwhile compete for the best film prize due to be awarded by a jury led by Palestinian filmmaker Elia Suleiman.