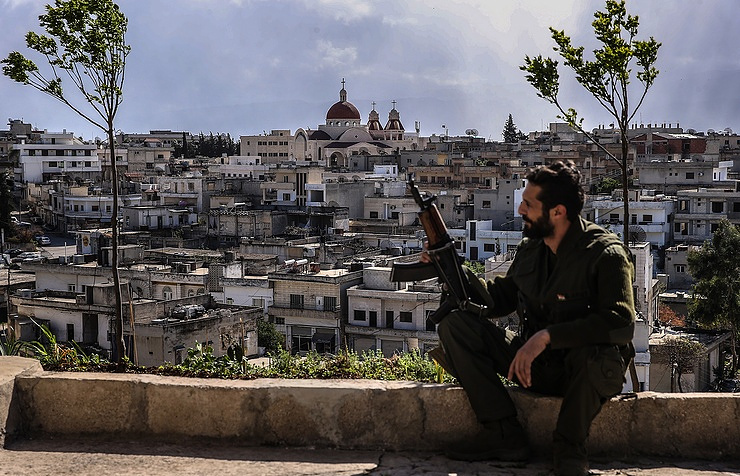 Ten ceasefire violations reported in Syria in past day

The ceasefire regime has been generally observed over the day in most of Syria’s provinces, with six violations reported in the provinces of Damascus and four – in the province of Latakia, the Russian center for reconciliation of the warring parties in Syria said in its regular daily news bulletin posted on the Russian defense ministry’s website on Friday.

“Units of the Jaysh al-Islam group which affiliates itself with the opposition conducted mortar fire at the settlements of Harasta, Jobar, Arbil, Kabune, Hasu al-Shalak and Douma in the province of Damascus,” the center said. “Militants of the Ahrar al-Sham group shelled the settlements of Ain al-Qantara and Kinsibba and positions of the Syrian government troops near the Abu Ali hill in the province of Latakia. Militants of the Kavkaz group shelled positions of government troops near the Zuaiqat mountain.”

No air strikes were delivered by the Russian air group and the Syrian air force at armed opposition group which have declared cessation of hostilities and informed the Russian or U.S. reconciliation centers about their locations, the bulletin says.

Reconciliation agreements were signed during the day with representatives of four settlements in the Syrian province of Latakia and one settlement in the province of Homs.

“The number of settlements joining the reconciliation process has reached 388,” the center said.

Talks on joining the regime of cessation of hostilities were continued with field commanders of armed opposition groups in the provinces of Damascus, Latakia, Homs, and al-Suwayda. “The number illegal armed groups that declared their commitment to the ceasefire terms remains unchanged – 69,” the center said.

Apart from that, the Russian military continue to deliver humanitarian cargoes to Syria’s population. A total of 22 tons of United Nations humanitarian cargoes – cereals, salt and sugar were dropped from a Russian Abakan Air plane to the Syrian city of Deir ez-Zor besieged by Islamic State terrorists.

“During the day, terrorists conducted fire from multiple missile launcher systems and mortars at Aleppo’s districts of Hai al-Ansari, al-Khalidiya, the al-Nayrab airport, the Al Assad military academy, a cement plant, a market place, the Castello trade center and southern farms. The humanitarian situation in the city of Aleppo is under control of the Syrian government. Hot meals and first aid outlets are operating near the humanitarian corridors,” the Russian center said. ”

The Russian reconciliation center aims to assist armed groups in Syria in concluding ceasefire agreements, maintain the truce regime, control its observance and organize the delivery of humanitarian cargoes to civilians.