Home » Culture and history » At the MFA, Renaissance mastery on display 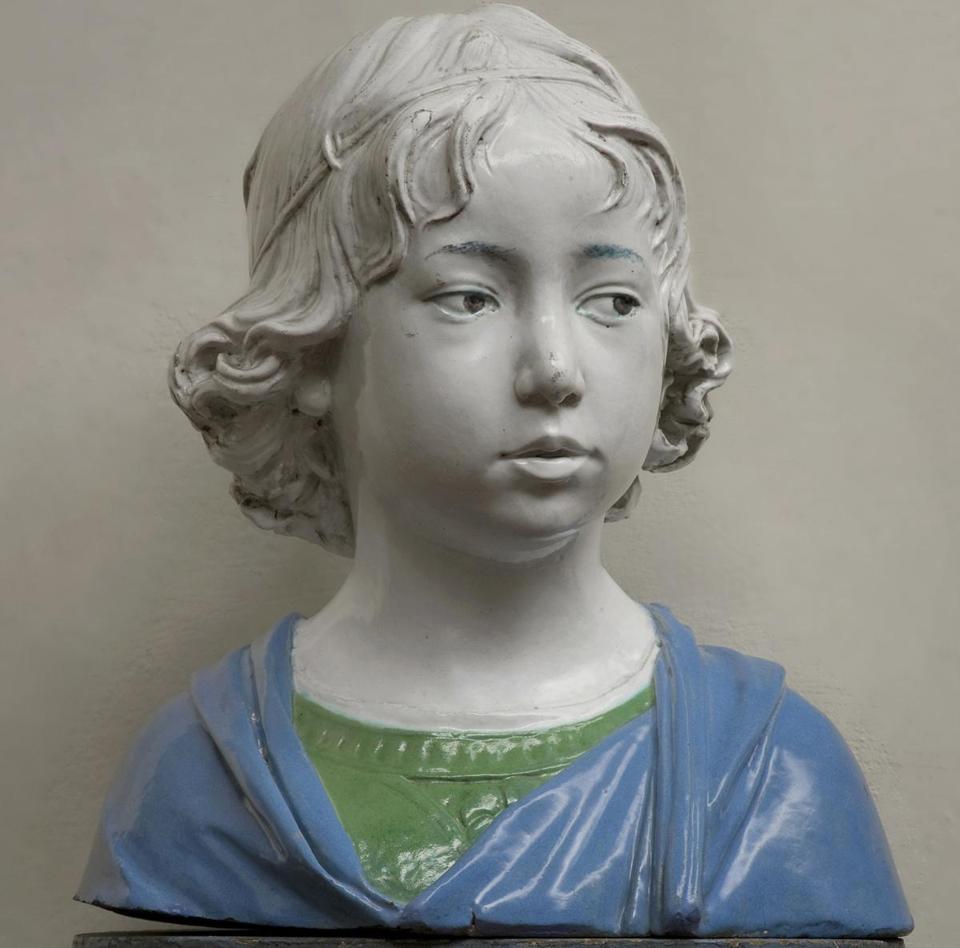 At the MFA, Renaissance mastery on display

Andrea della Robbia’s “Bust of a Boy” is one of the first sculptures you see in “Della Robbia: Sculpting with Color in Renaissance Florence,” a wonderful new show at the Museum of Fine Arts, through Dec. 4. What makes it a masterpiece is not just the way della Robbia has captured the provisional quality of childhood (the open brow, the soft, pouchy cheeks, the tentative sideways look) but the way the artist has hinted at something more finished.

Children’s faces are more mobile, and often less easy to read, than adults’. Even at rest, they have a fluttery, unresolved quality. Perhaps it’s because a child’s soul, or identity, hasn’t yet settled into the deep grooves, tensed brows, and florid skin we associate with “maturity,” with “character.”

Look closely at “Bust of a Boy” and you can’t help but notice a hint of adult fatigue in the slight lines under his eyes. The upright carriage of his head, too, suggests an unusual degree of self-possession. And isn’t there a flicker of amusement in his glance, as if whatever has just caught his attention has already been subjected to his ironic appraisal? This boy has an interior life.

For all its sensitive modeling, there’s no denying that the sculpture’s strikingly lifelike effect is hugely enhanced by the medium — by the shiny white surface of the boy’s skin, set off by the saturated blue and green of his clothing, and the surprising touch of turquoise in his eyebrows and around the rims of his eyes.

The exhibit was a revelation for me — not because I hadn’t encountered glazed terracotta sculptures before, but because I hadn’t really seen them. Associating them with the attractive but somewhat formulaic production of Renaissance maiolica, I had an unexamined bias against them. This show has dispersed the fog of my ignorance. It’s as dazzling and joyous as sunlight.

It focuses — though not exclusively — on several generations of the della Robbia family. It was Andrea’s uncle, Luca (1400-1482), who pioneered glazed terracotta as a medium suitable for sculptures on a large scale. Having perfected his technique, he passed on his trade secrets to Andrea (1435-1525), who in turn passed them on to his sons.

Luca was born in Florence and probably trained as a goldsmith. In 1431, when the great, Brunelleschi-designed dome of the city’s cathedral was finally nearing completion, Luca was commissioned to sculpt a cantoria, or singing loft, to adorn part of the vast new interior space. He carved it from marble.

Keep the context in mind: Not only was Brunelleschi’s dome nearing completion, but Lorenzo Ghiberti was working on his “Gates of Paradise” for the doors of the adjacent Baptistery; Leon Battista Alberti was working on his great tract on optics, “Della Pittura,” and Donatello was sculpting up a storm in bronze, marble, and polychrome wood. It was a high point of the early Renaissance.

Luca’s cantoria — inspired by the relief carvings on antique sarcophagi — secured his fame.

Six years later, he was commissioned to fill another space in the cathedral — this time a lunette over the entrance to the north sacristy. Despite his mastery of marble, and perhaps also because he realized he could never realistically compete with the genius of the older Donatello, Luca decided to try out an entirely different medium — one he had only toyed with until then.

After modeling figures in clay, he fired them in a kiln. He then covered them in lead and tin oxides and a vitreous material made from potash (a white residue derived from wood ash) to create a stable, white ground onto which he could paint a limited number of colored glazes. He then fired the piece again. The white pigment and the glazes fused.

The result? Brilliant colors that didn’t fade. Hard, durable and weatherproof surfaces. And a new way of making sculpture that was much cheaper than marble or bronze.

The della Robbia brand was off and running. Technical details were kept secret. Demand soared.

It was a family business. Even today, there is much dispute about attribution — about which member of the family designed what, exactly. But in the end, what the della Robbias cared about was the quality of what came out of their workshop.

Luca has always been regarded as the genius of the family. In front of his masterpiece, “The Visitation,” it’s easy to see why. This life-size tableau is the work most commonly reproduced in textbooks illustrating glazed terracotta. It usually resides in the church of San Giovanni Fuorcivitas, in Pistoia, 25 miles northwest of Florence. It is a coup for Cambareri that the church agreed to lend it, and wonderful for us that it has been cleaned for the occasion and installed unfussily with sensitive lighting.

The work, in glossy off-white, is modeled fully in the round. (It was divided into four pieces before firing, then reassembled). It shows the old and wrinkled Elizabeth, miraculously pregnant with John the Baptist, kneeling and embracing the much younger Mary, who is — just as miraculously — pregnant with Jesus.

In the story, told in the Gospel of Luke, the baby in Elizabeth’s womb leaps within her as he recognizes the presence of Jesus. It is a biological as well as a spiritual moment, haunted by unseen presences, sealed by love, wonder, and the aching empathy that can exist between two pregnant women.

In Luca’s powerful conception of the piece, Elizabeth, on her knees and “filled with the holy spirit” (Luke I: 41-45), looks up at Mary imploringly, as if to say, “What, oh what, is happening to us?” Mary’s hands, extending to hold the older woman’s shoulders, overlap with Elizabeth’s outstretched arms. Both women’s gestures express mutual compassion and bewilderment.

Mary has the most tender expression on her face. But she, too, is stunned by what is transpiring. Seen from one side, she has almost the same anxious, fluttering look as the young boy modeled 30 years later by Luca’s nephew.

The della Robbias turned out a great many relief sculptures depicting the Madonna and Child, and several are displayed here. Each is full of psychological and symbolic subtleties as well as enticing variations in color and composition.

The bigger works, though less well known, are just as impressive. Andrea’s “Prudence” (about 1475) is a monumental roundel presenting the allegorical figure of Prudence surrounded by gorgeously colored garlands of citrus fruits, pine cones, and grapes.

Just as eye-catching is the sequence of three life-size preaching saints modeled by Santi Buglioni. By the time they were made, about 1550, there were no more della Robbias working in Florence. Their technical secrets were out. But glazed terracotta was falling out of fashion. After the mid-16th century, its production virtually ceased.

But Buglioni’s sculptures, marked by the innovation of unglazed heads and hands to contrast with his figures’ gleaming, richly colored garments, are full of emotion, intensity, and expression.

This resplendent show leaves little doubt: If it makes no sense to think of the Renaissance without Florence, it makes almost as little sense to think of Florentine art without the medium of glazed terracotta — and specifically, the brilliant della Robbias.