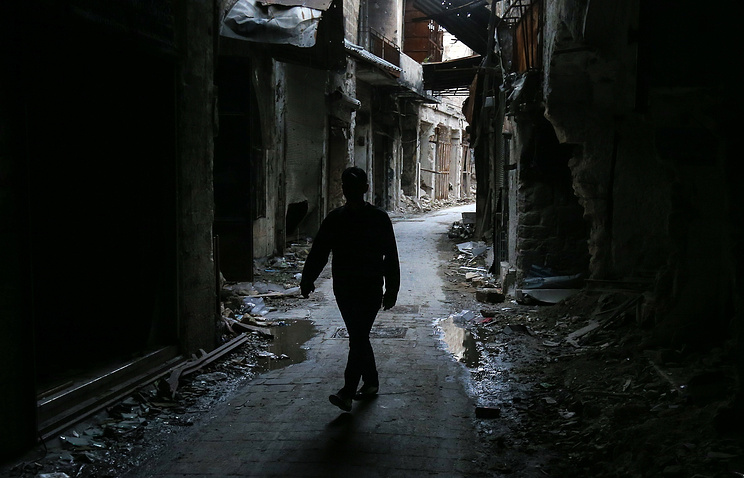 Terrorists have concentrated about 7,000 fighters on the south-western approaches to the Syrian city of Aleppo together with armored vehicles and artillery, Head of the Main Operations Department at Russia’s General Staff Sergei Rudskoi said on Wednesday.

“The most alarming situation has developed on the south-western approaches to Aleppo where terrorists have created a grouping of about 7,000 gunmen over the week with tanks, infantry fighting vehicles, artillery and vehicles with armament mounted on them,” he said, adding “this grouping continues to be replenished through terrorists’ reserves.”

“The militants are pulling in additional forces from their controlled areas in the provinces of Idlib, Homs and Hama,” the Russian general said.

The Russian general noted that situation around the Syrian city of Aleppo remains highly complicated as the militants continue attacking the government forces.

“In spite of the efforts to maintain ceasefire, the situation around Aleppo remains highly complicated,” he said. “Jabhat al-Nousra militants who are calling themselves Jabhat Fatah al-Sham now and units of the so-called moderate opposition that have joined them continue attacks on government forces in to the north and south of Aleppo.”

These attacks are undertaken in order to deliver weaponry and munitions, including explosives, to the city.

According to  Rudskoi, militants have lost more than 1,000 fighters to the southwest of the Syrian city of Aleppo over the past 4 days; about 2,000 insurgents have been injured.

He added that the Syrian government troops backed by the Russian Aerospace Forces had focused their efforts on thwart terrorists’ attempts to throw over fresh reserves to Aleppo’s southwestern outskirt,” Rudskoi added. According to him, strikes are being delivered at places of concentration of militant forces, armored vehicles, artillery positions and convoys delivering weapons and ammunition.

As reported earlier, on Saturday, August 6, the Syrian troops retreated from the battle positions on the compound of military schools in Aleppo. Along with it, they managed to disrupt delivery of armaments and redeployment of rebel reinforcements to the eastern part of the city, which is encircled by government troops.

On Monday, August 9, the military once again cut off the enemy’s access to the corridor leading to the eastern districts of Aleppo.

“A supplementary humanitarian corridor for the armed militants’ withdrawal located near Castello Road continues operating,” he said. “I’d like to emphasize that several armed groups that have recognized the unpromising character of further combat actions have left the eastern part of the city through this corridor taking the armaments away with them.”

The humanitarian operation in Aleppo continues, all humanitarian corridors in the city are open around the clock, the Russian general said.

“The humanitarian operation launched together with the Syrian authorities to provide assistance to civilians in Aleppo continues. All seven humanitarian corridors that have been set up for civilians leaving the city and gunmen willing to lay down arms are open and work around the clock,” he said.

Ambulance cars are on duty near these corridors, field kitchens have been deployed, there are supplies of drinking water and food, Rudskoi said.

“To date, the Russian Center for Reconciliation of the Warring Parties has delivered more than 50 tons of food, basic necessities and medications as well as 93 tons of bottled water to the city of Aleppo,” he added.

Almost 50 organizations have supported the Russian Defense Ministry’s initiative of rendering humanitarian aid to the residents of Syria’s city of Aleppo, the Russian general said.

“As of now, the National Defense Management Centre of the Russian Federation through its hotline and the Defense Ministry through its website have already received messages with confirmed intention from 47 various organizations to take part in rendering humanitarian aid to the Aleppo residents,” he said.

China and Serbia expressed support to the Russian initiative for the rendering of Humanitarian operation in Aleppo, Rudskoi reaffirmed.

All military hostilities in Aleppo will stop for three hours every day as of August 11 to allow humanitarian convoys into the Syrian city, Sergei Rudskoi added.

“As of tomorrow, humanitarian aid ‘windows’ will open from 10am to 1pm local time to guarantee the safe passage of relief convoys into Aleppo. All military hostilities, aviation and artillery strikes will be halted during that time,” Rudskoi said.

Rudskoi also noted that Russian military experts would continue discussing the relief operation in Aleppo with the United Nations and the United States.

“We are ready for a constructive dialogue with all the sides interested in settling the Syrian crisis. We support the proposals by the UN to establish joint control over the delivery of humanitarian aid to the population of Aleppo along the Castello road,” Rudskoi said.

Moscow and Damascus launched a joint humanitarian operation in Aleppo on July 28. Several corridors were set up for civilians and gunmen leaving the city. Food, medicines and staple commodities are delivered to Aleppo.

A separate corridor was meant for the armed groups willing to leave the city who are not going to lay down arms. Russian Defense Minister Sergei Shoigu earlier explained that this step stemmed from the fact that Russia received no data from the US on drawing the line between the Jabhat al-Nusra group (outlawed in Russia) and the Free Syrian Army.