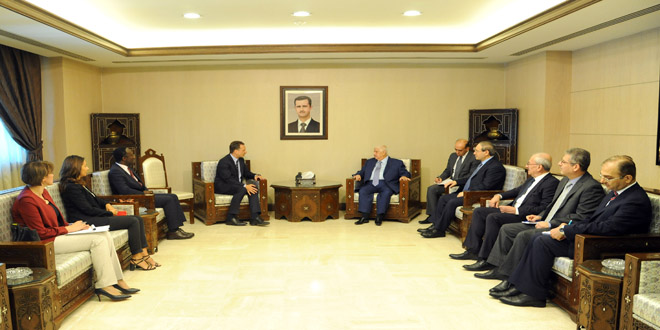 Syrian Deputy Prime Minister, Foreign and Expatriates Minister Walid al-Moallem met on Sunday Commissioner-General of the United Nations Relief and Works Agency for Palestine Refugees in the Near East (UNRWA) Pierre Krahenbuhl and the accompanying delegation.

The talks touched upon the standing relations of cooperation and coordination between the Syrian government and the Agency, which Syria always works on enhancing them to the best interest of the Palestinians residing in Syria in terms of reducing their suffering and meeting their needs until their return back to their homeland.

Al-Moallem affirmed to Krahenbuhl that even under the terrorist war waged on Syria and the unjust economic sanctions imposed on it, the government has provided all forms of support and assistance to the Palestinians wherever they are on Syrian soil despite the repeated attacks launched on their camps by the terrorist groups.

For his part, the UNRWA Commissioner General hailed the constant efforts exerted by the Syrian government to provide help and care to the Palestinian refugees, expressing his understanding of the difficult circumstances in Syria and its responsibilities of protecting its territory and citizens, including the Palestinians.

Krahenbuhl stressed the need for the good relationship and coordination to continue between the Agency and the Syrian government in order to help improve the living conditions of the Palestinian refugees.

Earlier, lengthy talks were held between Deputy Foreign and Expatriates Minister Fayssal Mikdad and Krahenbuhl and the accompanying delegation on cooperation between both sides.

Focus was laid on the Syrian government’s efforts to deliver aid to the Palestinian camps in Syria and fending the terror threat off these camps to prevent terrorist crimes against the refugees such as the one that took place in Aleppo where a Palestinian child from Handarat Camp was slaughtered by the gangs of “Nour al-Din al-Zenki” terrorist group.