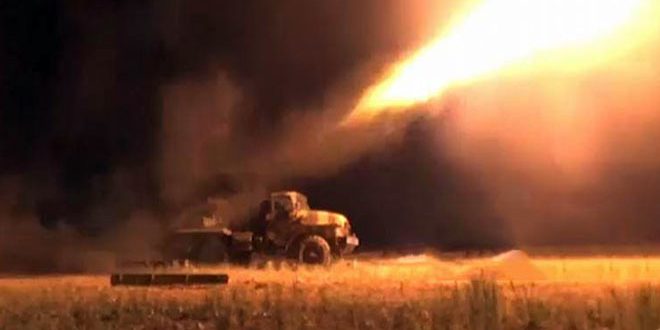 A military source has stressed that the Syrian Arab army is determined to eliminate the terrorist groups from all areas they are positioned across the country and prevent them from achieving their goals in Aleppo, Syrian News Agency “SANA” reported.

The source said that the Syrian army air force on Sunday destroyed scores of armored vehicles and cars equipped with machineguns and loaded with ammunition, and killed a huge number of terrorists in Kafernaha, al-Atareb, Khan Touman, Orum al-Kobra, al-Zirbeh, Khalsah and at the surroundings of the Military Academies in Aleppo.

The army units secured their positions in the surroundings of the military Academies in Aleppo and dealt blows to gatherings of terrorists.

Syrian and Russian air forces destroy three positions for Jaish al-Fateh terrorists in Khan Touman and Khan al-Asal in addition to convoys of vehicles and armed vehicles on the axes of Saraqeb- Aleppo, Taftanaz- Aleppo and al-Zurba- Aleppo.

Army units south Aleppo in cooperation with the allied forces in coordination with the Air Force draw terrorist groups to fire pockets, inflicting heavy losses in personnel and munitions upon them.

Earlier, the source told SANA that units of the army and armed forces, in cooperation with the supporting forces, are continuing the military operations to the south of Aleppo and courageously confronting the terrorist groups and engaging in fierce battles in a number of posts into which the terrorists infiltrated in the area of the military academies.

It added that the military operations are continuing on all axes to the south and southwest of Aleppo and that heavy losses are being inflicted upon the terrorist groups in the arms and personnel.

The source stressed that these terrorist groups haven’t been able to break the siege imposed on the terrorists in the eastern neighborhoods of Aleppo, indicating that the mass media which is involved in shedding the Syrian’s blood is launching a wide psychological war through broadcasting tens of fabricated photos and videos to affect the morale of the citizens and mislead the public opinion and to cover the large numbers of the killed and injured terrorists in Saturday’s battles .

Meanwhile, SANA reporter in Aleppo said that large numbers of terrorists attacked the area to the south and southwest of Aleppo on Saturday evening.

Earlier, a military source said that the Syrian army air force intensified airstrikes against the supply routes of the terrorists and the axes of their movement to the southwest of Aleppo.

The source indicated that the army air force destroyed tens of terrorists’ vehicles and killed all terrorists onboard on the axes of Saraqeb, al-Zarbeh, al-Rashidin, Orum al-Kobra, Khan al-Assal and Maaret al-Nouman in the direction of Aleppo.

The military source also mentioned that the Air Force hit and destroyed reinforcement and supply convoys sent from areas in Idleb and Hama to support terrorist groups in Aleppo, destroying those convoys and killing many terrorists and injuring others.

Army units and the supporting forces have established control over large parts of Hawsh Nasri town in Eastern Ghouta in Damascus Countryside.

This advance came few days after establishing control over Hawsh al-Fara town, which was the first defensive line for terrorist groups in Eastern Ghouta.

In a statement to SANA, the military source explained that the army units continued their operations in Hawsh Nasri town and its farms which were used by terrorists as fortified sites to attack the army’s posts and target safe neighborhoods and towns with mortar shells.

The army units and the popular defense groups managed through high level of coordination to break through the terrorists’ fortifications and advance into the town, which is the terrorist groups’ second defensive line towards Douma city, their most dangerous stronghold in Ghouta, according to the source.

The source affirmed that large parts of Hawsh Nasri town came under the army’s control after fierce clashes with the terrorists, who suffered heavy losses.

Units of the army and armed forces destroyed two of the terrorists’ cars and three of their motorcycles in an ambush on the road of Tafas-al-Yadoda in the western countryside of Daraa southern province, killing many terrorists and injuring others including a number of their leaders.

The Syrian army air force destroyed ISIS terrorist’s vehicles, some equipped with
machineguns, after targeting their gatherings at the surroundings of al-Shaer oil field, in the western countryside of Palmyra in Homs province.

The army killed a number of terrorists during the operation.