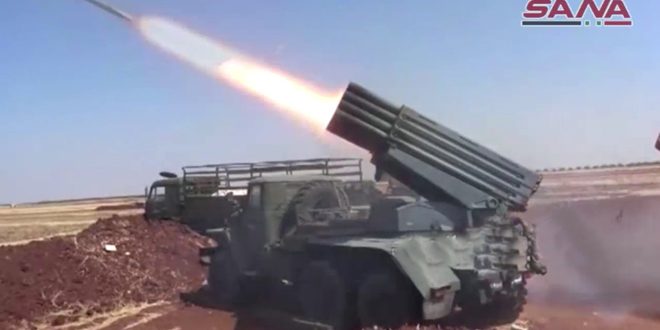 The Syrian army and armed forces continued today its crackdown on armed terrorist organizations all over the country, killing scores of terrorists and destroying their criminal tools, Syrian News agency “SANA” reported.

A unit of the army and the armed forces destroyed a car belonging to the terrorist groups in an ambush on the road of Tafas-al-Yadoda in Daraa Countryside.

A military source told SANA that army units ambushed a car carrying terrorists on the road of Tafas-al-Yadoda in Daraa western countryside.

The source added that the car was destroyed in the ambush with all the arms and military equipment inside it and all terrorists on board were killed.

Meanwhile, an army unit killed all members of an armed terrorist group who were trying to infiltrate from the Train Station towards one of the military posts in the surroundings of al-Zara power plant in the southern countryside of Hama province.