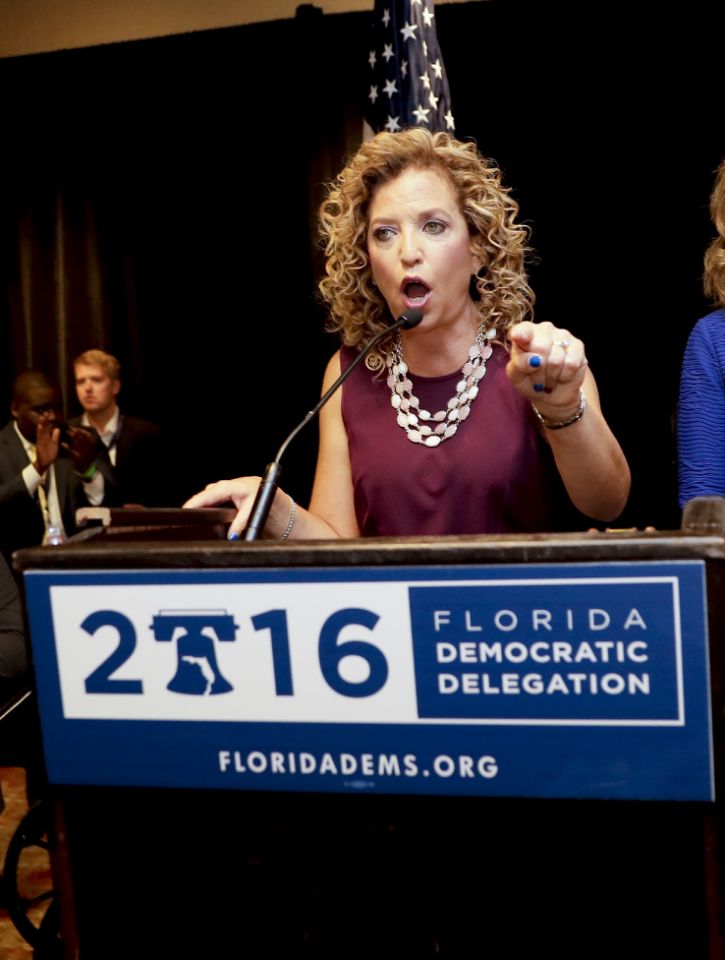 Ousted from DNC, Wasserman Schultz fighting to stay in House

Tim Canova has raised about $2.8 million thanks to the former presidential candidate’s endorsement, an almost unheard of amount for a first-time candidate and almost as much as Wasserman Schultz’s $3 million. He is running an aggressive campaign, accusing Wasserman Schultz of being a pawn of Wall Street who backs corporate donors over progressive causes. The primary is Aug. 30.

“Wasserman Schultz is like a lot of politicians who live in their own little bubble. They are not out and around the people and I have been,” said Canova, 56, who teaches business law at Nova Southeastern University.

Wasserman Schultz, 49, re-emerged in public Thursday, six days after the Democratic National Convention and her forced resignation as national party chair following a leaked email scandal. She immediately went on the counter-attack, saying Canova is using “disingenuous half-truths, lies and distortions” to attack her record. She received loud applause Thursday night at a forum on healing the rift between the police and black community that was held at a predominantly African-American mega church.

“I have a deep and proud commitment to our community,” she said, listing Social Security, the Affordable Care Act and recovery programs that eased the 2008 financial crisis as examples of progressive policies she helped pass. “My opponent can say whatever he wants, but the people I represent … know better.” She also has the support of Vice President Joe Biden, who will campaign on her behalf at a closed fundraiser Friday evening.

In Wasserman Schultz’s previous elections, she never drew a primary opponent in her suburban Fort Lauderdale district or a serious Republican challenge. In general elections, she received at least 60 percent of the vote in a 2-to-1 Democratic district that stretches from the ocean to the Everglades and includes high-rise beachfront hotels and condos, golf resorts and luxury malls and a mix of poor, middle-class, retiree and well-heeled communities.

Wasserman Schultz has been perceived as such a powerhouse — and the district so uncompetitive — that former U.S. Rep. Allen West, a tough-talking favorite of conservative Republicans and one of her fiercest critics, ran legally in a neighboring district even though he lived in hers to avoid near-certain defeat. The district favored Clinton over Sanders by a 68 to 31 percent margin in the March presidential primary.

“I’ve known Debbie for 25 years and she has always been very, very supportive of the district and environmental matters, which is important to me,” said supporter Lily Sayre, who owns a horse stable in Southwest Ranches, a semi-rural enclave in the district. “I’ve always known her to be forthright and standing by what she believes, whether it helps her politically or not.”

The email leaks that cost Wasserman Schultz her DNC post are motivating Canova’s backers, who say they prove what they long believed: that Wasserman Schultz threw aside fairness and neutrality to weaken Sanders’ chances of defeating Clinton in the Democratic primaries.

“My family fought in the Revolutionary War, the War of 1812, the Civil War and World War I and World War II, including my father. Some of them lost their lives. No one steals my right to a free vote,” said makeup artist Ellen Kinnally, a Sanders supporter who said she moved into the district specifically to vote for Canova.

The leaked emails show that DNC staffers closely tracked their boss’s race. They monitored media coverage and tried to get details of a speech Canova gave by internet to an Alaska progressive group while she spoke at that state’s Democratic convention. They circulated a campaign news release about Canova getting Sander’s endorsement — Wasserman Schultz ordered Canova’s name stricken from its headline.

Canova said he began considering a challenge last year when he organized opposition to the Trans-Pacific Partnership trade deal and Wasserman Schultz and her congressional staff never agreed to a meeting. She became the only Democrat in Florida’s House delegation who voted to fast-track the pact’s approval, which had been opposed by labor unions, environmental groups and other liberal constituencies as well as some tea party groups on the Republican side.