Home » Manchet 1 » Obama: ISIL still has ability to inspire attacks… and this is why we paid USD400 million to Iran 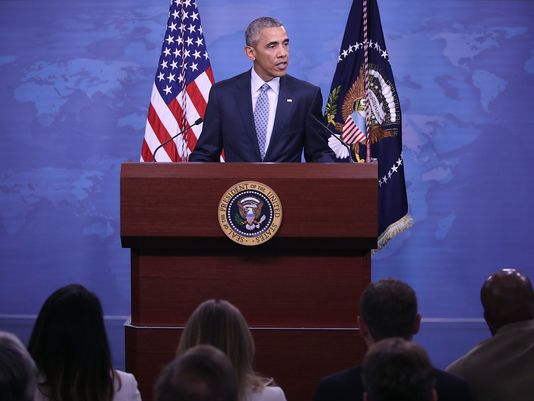 Obama: ISIL still has ability to inspire attacks… and this is why we paid USD400 million to Iran

Obama said the threat of ISIL attacks in the United States keeps intelligence and law enforcement officials working around the clock.

“I think it is serious,” he said. “We take it seriously.”

But the focus of the Islamic State (also know as ISIS or ISIL), is less on 9/11-style attacks because the terrorists realize they generate attention from attacks with small arms or even a truck as happened in Nice, France.

“The possibility of a lone actor or a small cell that kills people is real,” Obama said.

Obama met at the Pentagon with members of the National Security Council to discuss progress against ISIL. Defense Secretary Ash Carter and Marine Gen.Joseph Dunford, chairman of the Joint Chiefs of Staff, took part in discussions about the air war as it enters it nears its second anniversary.

Thursday’s attack destroyed a pickup truck with a recoil-less rifle, a gun that fires artillery rounds, according to the Pentagon. The expansion of the air war to Libya has been dubbed Operation Odyssey Lightning. The U.S.-led coalition began attacking ISIL fighters in 2014 after they swept through large parts of Iraq and Syria.

The strikes in Libya have been requested by the Government of National Accord, which is attempting to expel ISIL and consolidate control of the war-torn country. ISIL militants are under assault in Sirte, their seafront stronghold. Earlier this week, U.S. warplanes destroyed tanks, military vehicles and earth-moving equipment.

U.S.-backed ground forces in Iraq and Syria have recaptured about 40% of the ground ISIL had seized. Most notably, Iraqi forces have evicted them from the western cities of Ramadi and Fallujah and are focusing their attention on Mosul, Iraq’s second-largest city. Gains have been made in Syria as well where local fighters have been closing in on Manbij, a key transit point for ISIL’s foreign fighters.

U.S. and allied warplanes have conducted more than 600 airstrikes on Manbij, Army Col. Chris Garver told reporters on Wednesday. About half the city has been retaken from ISIL.

ISIL has not had a successful operation in Iraq or Syria in a year, Obama said.

Obama blamed the Syrian government of Bashar Assad for the civilian crisis in Syria. “It is deplorable,” Obama said.

The military campaign isn’t enough, Obama said, adding that the United States and its allies have pledged $2 billion to help build up the Iraqi government.

Obama also talked about the transmission of the mosquito-borne Zika virus in the United States. There have been 15 cases in the Miami area.

More cases are expected, he said, but a major outbreak is unlikely. But the complications for pregnant women and their children can be severe.

Obama said the $400 million paid in cash to Iran earlier this year was not ransom to release U.S. hostages. The payment, he said, was announced by the White House in January, and this “was not some nefarious deal.”

Instead, “we have the manufacturing of outrage in a story we announced in January,” Obama said. The one piece of news was that the money was paid in cash, he said, and that is because the United States had a strict sanctions regime against Iran at the time that prohibited wire transfers or normal bank relationships.

The Iran nuclear deal, Obama said, is working. “By all accounts, it has worked exactly the way we said it would.”