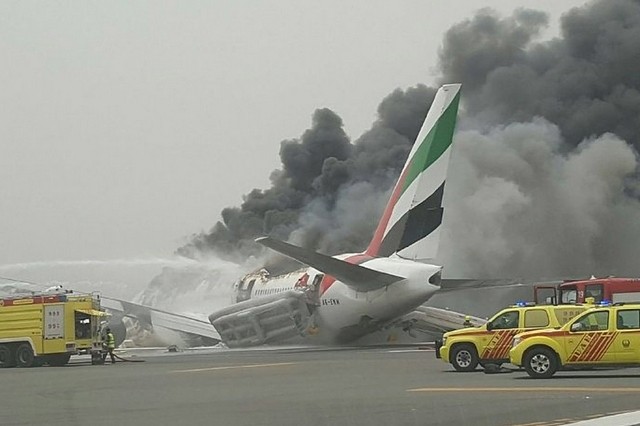 Dubai Airports said Emirates Airline flight EK521 was involved in “an incident” during landing at Dubai International at 12.45pm, as reports suggested it landed without landing gear.

“Emergency response teams have been activated and all passengers and crew have been safely evacuated.

“Operations at DXB have been affected with all departing flights delayed until further notice.”

Emirates added that it is expecting a 4-hour network-wide delay.

All departure flights from Dubai International Airport have been delayed until further notice. Some inbound flights are being diverted to other regional airports. The Sheikh Zayed Air Navigation Centre said it had implemented an contingency plan to manage air traffic.

Passengers at the airport reported on social media that the flight, which was carrying 282 passengers and 18 crew, landed without landing gear and caught fire. An explosion can be seen aboard the flight in some footage.

Emirates Airline confirmed “an incident” happened at 12.45pm via Twitter.

Emirates can confirm that an incident happened at Dubai International Airport on 3rd August 2016 at about 12.45pm local time.

“Our main priority at this time is the safety and wellbeing of all involved and full co-operation is being extended to the authorities and emergency services managing the situation.

“We will update the Emirates website and social media channels as more information becomes available.”

However, the emirates.com website was down on Wednesday afternoon, though its mobile site was still operational.

Flightradar24, a flight monitoring site, said on Twitter that there are no take-offs or landings from Dubai airport because of the incident.

The site also reported that the plane was a Boeing 777 and the flight was EK521, from Thiruvananthapuram, India.

Dubai Media Office said on Twitter: “All passengers were evacuated safely and no injuries have been reported so far.”

The incident was the most serious accident yet for Emirates, the only hull loss for the airline since it started operating three decades ago.

Boeing’s 777 model is the largest twin-engine airliner in production and the most used wide-body. Emirates is the largest operator of the plane. The aircraft is also one of the safest jets in the world, with only a handful of them having suffered irreparable damage since the model’s introduction, according to Aviation Safety Network.

The aircraft involved entered service in March 2003, according to data from Flightradar24.