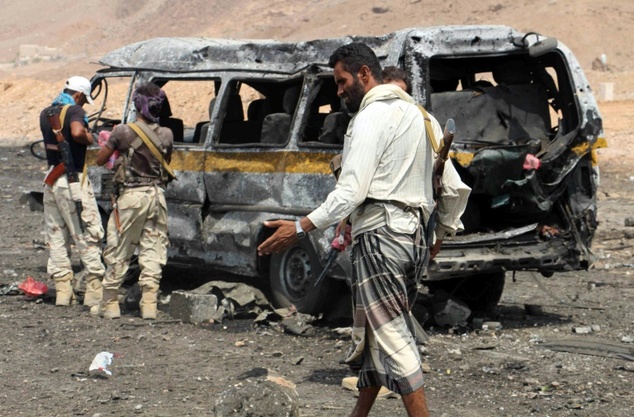 Yemen’s government on Sunday accepted a UN-proposed plan to end fighting that has killed thousands, but the rebels rejected it, insisting that any settlement must first tackle a unity administration.

The draft agreement, which follows several months of UN-brokered negotiations in Kuwait, stipulates that the Iran-backed Huthi rebels must withdraw from Sanaa, which they overran in September 2014.

Yemen, descended into chaos after the 2012 ouster of Ali Abdullah Saleh.

The United Nations says the conflict has killed more than 6,400 people and displaced 2.8 million since then, when a Saudi-led Arab coalition launched a military campaign to support Hadi.

More than 80 percent of the population urgently needs humanitarian aid.

The proposed peace deal is broadly in line with the demands of Hadi’s government.

It replaces a roadmap previously proposed by UN envoy Ismail Ould Cheikh Ahmed that stipulated the creation of a unity government including the insurgents, which was rejected by Hadi’s government.

Under the new plan, a political dialogue between the factions would start 45 days after the rebels withdraw and hand over heavy weapons to a military committee to be formed by Hadi.

Prisoners of war would also be freed.

The government’s acceptance came after a meeting in Riyadh chaired by Hadi.

“The meeting approved the draft agreement presented by the United Nations calling for an end to the armed conflict and the withdrawal (of rebels) from Sanaa” and other cities they have seized, said a statement.

According to sources close to the delegates at the Kuwait talks, the government accepted the deal following pressure from Saudi Arabia which wants to show the rebels are unwilling to accept a political solution.

Yemeni Foreign Minister Abdulmalek al-Mikhlafi, who is leading Hadi’s negotiating team, said he had sent a letter to the UN envoy informing him the government backed the “Kuwait Agreement”.

One precondition, however, is that the Huthis and allied forces loyal to Saleh sign the deal by August 7, Mikhlafi wrote on Twitter.

The rebels rejected the proposal.

“What was presented by the (UN) envoy was no more than just ideas for a solution to the security aspect, subject to debate like other proposals,” a statement from the rebel delegation said.

It charged that the Yemeni government announcement of a draft settlement was “no more than media stunts” aimed at foiling talks.

The rebels reiterated their long-standing demand that a peace deal must first forge an accord on a new consensual executive authority, including a new president and government.

This condition is an explicit demand for the removal of the internationally recognised Hadi.

Huthi spokesman Mohammed Abdulsalam said on Twitter before the government announcement that the rebels insist on a comprehensive and complete peace agreement, rejecting what he called “half solutions”.

The government’s announcement came just hours after the coalition said a Saudi army officer and six soldiers were killed in border clashes with Yemeni rebels on Saturday.

In Yemen’s southern Shabwa province, 18 rebels and 15 loyalists have been killed since Saturday, other military sources said.

The rebels angered the government last week by announcing the formation of a 10-member “supreme council” to run Yemen, which Mikhlafi branded a “new coup”.

Under the proposed peace deal, that council would be abolished and all rebel decisions since they occupied Sanaa would be rescinded.

A defiant Saleh defended the new council, which he said aimed at “filling the political void left in the country after the legitimacy of Hadi expired and he fled” to Saudi Arabia.

“This council will govern the country as a presidential council and in accordance with the country’s constitution and laws,” Saleh said.

Hadi’s government has used main southern city Aden as a temporary capital since it was recaptured from the Huthis last year.

But the authorities have struggled to secure the port city, which has seen a string of bombings and assassinations by the Islamic State group and Al-Qaeda.

On Sunday, two policemen were killed and a third was wounded by a bomb and a car blew up elsewhere in the city without causing casualties, officials said.

The jihadist rivals have exploited the turmoil to boost their activities in the impoverished Arabian Peninsula country.