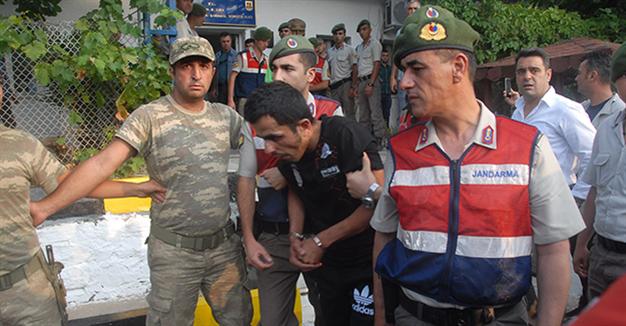 A total of 11 soldiers who were involved in an attempt to either capture or kill President Recep Tayyip Erdoğan on the night of the failed July 15 coup attempt have been captured in the southern resort of Marmaris.

An operation to capture the 11 was conducted in Şirinköy Village in the Ula district by gendarmerie forces, who clashed with rogue soldiers late on July 31. There were no reports of casualties.Muğla Gov. Amir Çiçek told Anadolu Agency that Major Şükrü Seymen, the alleged commander of the fugitive soldiers, was among nine suspects detained late on July 31.

In addition, two more soldiers involved in the attack on Erdoğan were also captured in the morning hours of Aug. 1.

The soldiers were identified as Mustafa Serdar Özay and Muammer Gözübüyük, according to an official. However, there was another soldier reported to be missing who had earlier left the group.

On July 25, seven other fugitive soldiers were captured during operations.

Over 20 suspected members of the military squad involved in the attack – who are believed to have been ordered to capture or kill Erdoğan during the coup attempt blamed on U.S.-based Islamic scholar Fethullah Gülen – were previously remanded in custody to face trial.

Erdoğan told the nation on live television during the coup attempt that he had narrowly escaped an attack on his life when the hotel in Marmaris where he was staying was bombed just 15 minutes after he left.