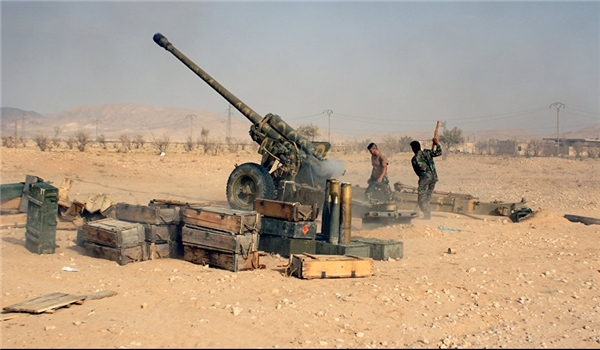 Syrian army’s artillery and missile units opened heavy fire on the terrorists’ positions on the Western side of Aleppo airport, Southeast of the city, inflicting dozens of casualties on the militants.

Terrorist groups suffered a heavy death toll and their equipment sustained major damage after their strongholds in Bab al-Neireb region came under attacks by the Syrian artillery and missile units.

Local sources said that several ambulances rushed to the targeted region to transfer the wounded terrorists to field hospitals.

Reports said earlier today that Syrian Army troops and their popular allies are getting ready to carry out a new phase of offensives in the Northern countryside of Aleppo to capture a key region to reinvigorate security of the newly-captured districts in the Northern part of the city.

“The Syrian Armed Forces and popular forces have shifted their attention to the important village of Kafr Hamra, which sits on the Northwestern side of Aleppo city,” the sources said.

“The Syrian soldiers are preparing to strike Kafr Hamra from two different flanks,” they added.

Kafr Hamra was an important area used by the terrorist groups to launch mortar shells and hellfire cannons into the Western Aleppo neighborhoods; it will now be the primary area they will use to target the provincial capital.

Due to its proximity to the New Aleppo District and al-Zahra Association Quarter, Kafr Hamra will be one the Syrian Arab Army’s top priorities in Aleppo province.