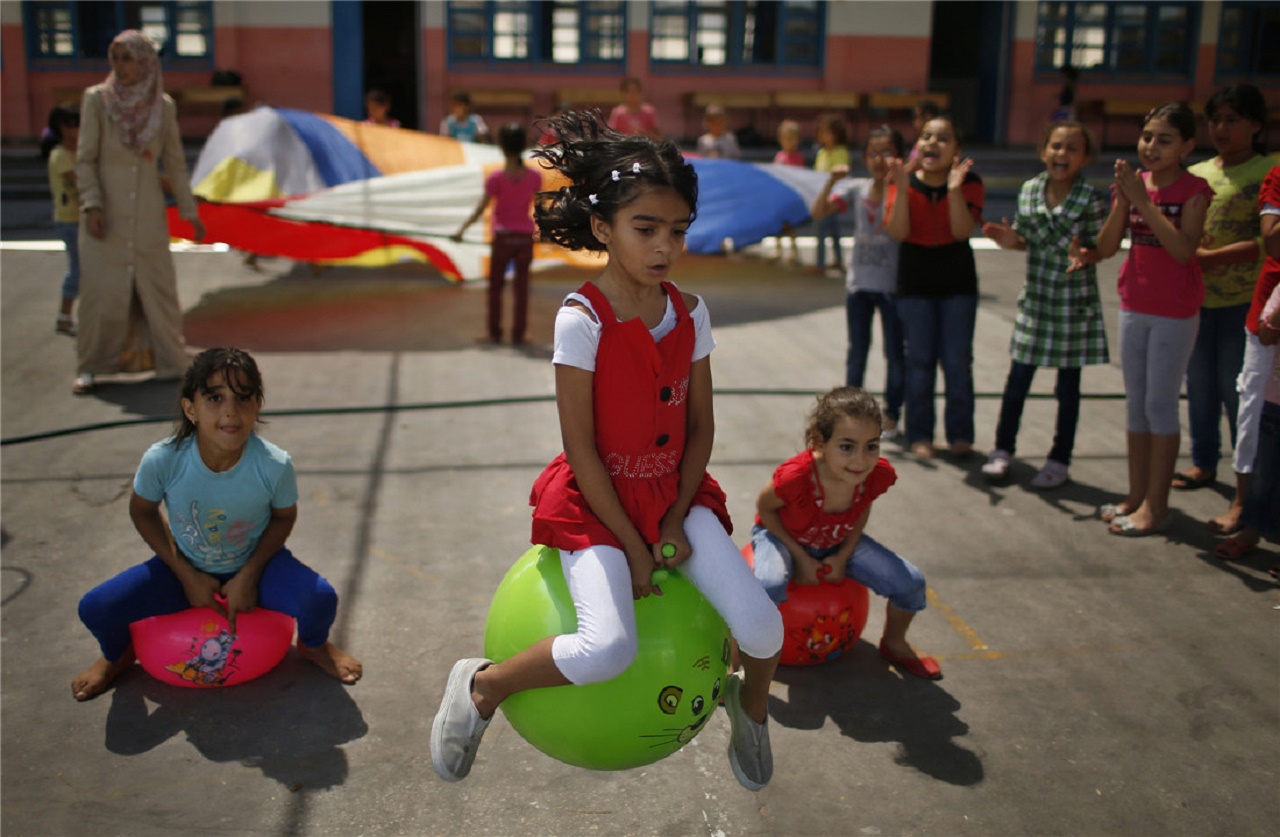 At an amusement park in Gaza city, 12-year-old girl Allaa’ Izedin and her friends were so delighted to grab their seats in a little train that was made in China and imported to the Hamas-ruled Gaza Strip.

Laughter of Izedin and her friends was heard as the train drove on a small railway into a big hall. The recently built amusement park in Gaza city brings fun to children in the Gaza Strip that has been under a tight Israeli blockade since Hamas violent takeover of the coastal enclave in the summer of 2007.

“I’m on summer vacation … and the most amazing time I usually spend is here at this amusement park. I enjoy riding the train and playing with my friends on other games and toys,” said Izedin.

12-year-old Khalil al-Halabi was playing on the magnetic electric cars, which were also imported from China. He came with his family, and voiced very happy to see all the games in the park, adding that he hopes to see bigger and larger amusement parks like Disneyland Park.

More businessmen went to the authorities in the Gaza Strip to apply for the import of amusement games and toys from China for more amusement parks to attract families and their children.

The projects are considered a good investment for the Palestinians in the Gaza Strip, which may help boost the weak economy in the coastal enclave and also entertains the children.

An amusement park called Star Center was opened at the beginning of summer this year on a 4,000 square meters area in western Gaza city.

The park holds 30 different games and toys, all imported from China through Israeli-controlled crossings, said Abdul Rahman al-Sane’a, the project supervisor, adding that the whole park includes halls for entertainment plays, games and toys, a special place for kids, two restaurants and a cafe.

Entertainment parks are rare in Gaza Strip where poverty and unemployment prevail. Experts said that Gaza Strip is passing through a sharp slow activity for local investments due to the deteriorated economical situation.

The unemployment rate in the Gaza Strip reached 42.7 percent due to ten years of an Israeli blockade, according to an official report from the Palestinian Central Bureau of Statistics.

Humanitarian organizations also warned that 80 percent of Gaza families depend on international aid to sustain living and their income is only two U.S. dollars daily amid the tight blockade and ten years of internal division between Hamas ruling Gaza and the West Bank ruled under President Mahmoud Abbas.

Israel has waged three large-scale military operations since the end of 2008. The last conflict broke out in the summer of 2014, which was the longest ever and lasted for 50 days.

“I feel extremely happy and delighted when I come to this place. Coming here helps me forgetting the awful bloody scenes and images printed in my mind, like those dead children being shelled by the Israeli rockets, and homes which were totally destroyed by the warplanes missiles,” said the boy.

Like Iziden, children in the Gaza Strip are dreaming to live in an environment with peace and stability. The boy said that he is not different from other children across the world and that all what he needs is to go to a safe and secure place to play, away from the scenes of blood and destruction.

Lara Qishawi, a 9-year-old girl, said that she felt brilliant in the summer camp Rainbow Amusement Center organized for children, which extends for three weeks and all activities include entertainment and playing are free of charge.

Om Ahmad al-Aydi, mother of two children, said that such amusement centers with entertainment games and toys from China are great “and gives an opportunity to our children to play and have fun,” adding that “we really need lots of things in Gaza mainly to entertain our children.”

Dozens of Gaza merchants and businessmen are importing Chinese-made goods by traveling to China to buy products, ship them to an Israeli port and then deliver them to Gaza through Israeli-controlled crossing points.

There are no official figures to show how big the scale of the import is. However, Maher Taba’a, the man who is in charge of public relations in Gaza Chamber of Commerce, told Xinhua that more than 50 percent of the general import of goods is coming from China.

In spite of the big challenges and deterioration of economy, around 2,000 Palestinian businessmen are seeking opportunities in Chinese goods, because the Chinese products are “special and distinctive” with reasonable prices, said Taba’a.