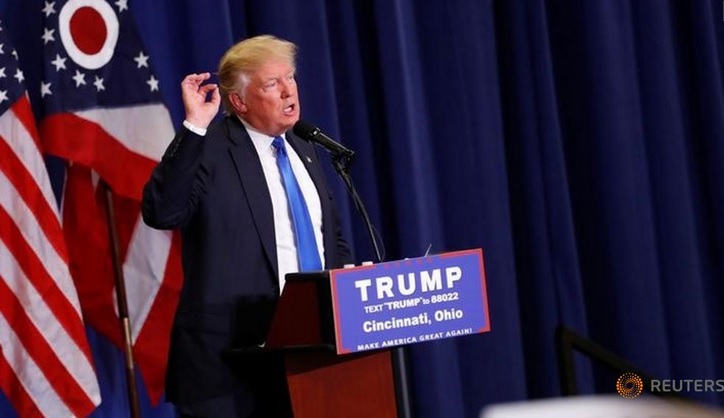 “If they hacked, they probably have her 33,000 emails. I hope they do,” Trump told reporters at a press conference in Miami.

“You’d see some beauties, so we’ll see,” Trump said, adding that Russia “will probably be rewarded mightily by the press” if obtaining these emails.

In a tweet posted online earlier Wednesday morning, Trump said “If Russia or any other country or person has Hillary Clinton’s 33,000 illegally deleted emails, perhaps they should share them with the FBI.”

Trump made the remarks at a time when Clinton is to accept the Democratic Party’s nomination for president at the Democratic National Convention being held in Philadelphia, Pennsylvania.

The convention is overshadowed by a scandal over some leaked emails from officials of the Democratic National Committee, which exposed that they worked in favor of Clinton against her rival Senator Bernie Sanders while they were supposed to remain neutral. The outcry over the emails led to the resignation of Democratic Chairwoman Debbie Wasserman Schultz.

This scandal further tarnished Clinton’s already negative image while pushing away many of Sanders supporters, who the Clinton campaign hopes will shift their support to Clinton after Sanders’ exit.

The Clinton campaign blamed Russian hackers for leaking the emails on the Wikileaks website, citing Moscow is trying to help Trump win the election because of his pro-Russian position. The Trump campaign has denied such accusations.

Clinton has been widely criticized by her use of a private email account and a private email server installed at her home while she was secretary of state in the first term of the Obama administration.

Clinton has handed over about 30,000 work-related emails to the State Department, but she deleted about half of her emails that were “personal” in nature.

Though declining to press criminal charges against Clinton, the Federal Bureau of Investigation (FBI) faulted her for being “extremely careless” in handling classified information.

The Clinton campaign on Wednesday blasted Trump for calling on Russia and other hackers to find Clinton’s deleted emails.

“This has gone from being a matter of curiosity, and a matter of politics, to being a national security issue,” Clinton’s senior policy adviser Jake Sullivan said in a statement.