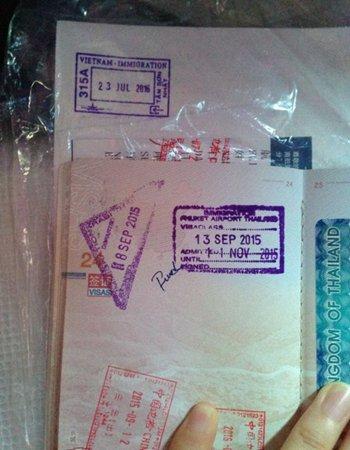 A woman surnamed Zhong from south China’s Guangzhou visited Vietnam on July 23. While entering the border, the Vietnamese border staff asked Zhong to hand in her passport and wrote offensive languages on it. Chinese Consulate-General in Ho Chi Minh City said the embassy is currently dealing with the matter.

Zhong’s passport was handed to Vietnamese border staff when she was entering the border at Tan Son Nhat International Airport.

“The border staff kept my passport for around three minutes and after I got it back, I saw ‘F*ck you’ was scribbled on two pages where nine-dash line is printed”, said Zhong, who also expressed her disappointment at Vietnamese civil servants’ appalling conducts.

All new Chinese passports issued from 2012 feature Chinese map printed with nine-dash line on page 8, 24 and 46. The offensive scribblings were written on page 8 and 24 of Zhong’s passport.

The Vietnam Embassy in China has declined to comment.