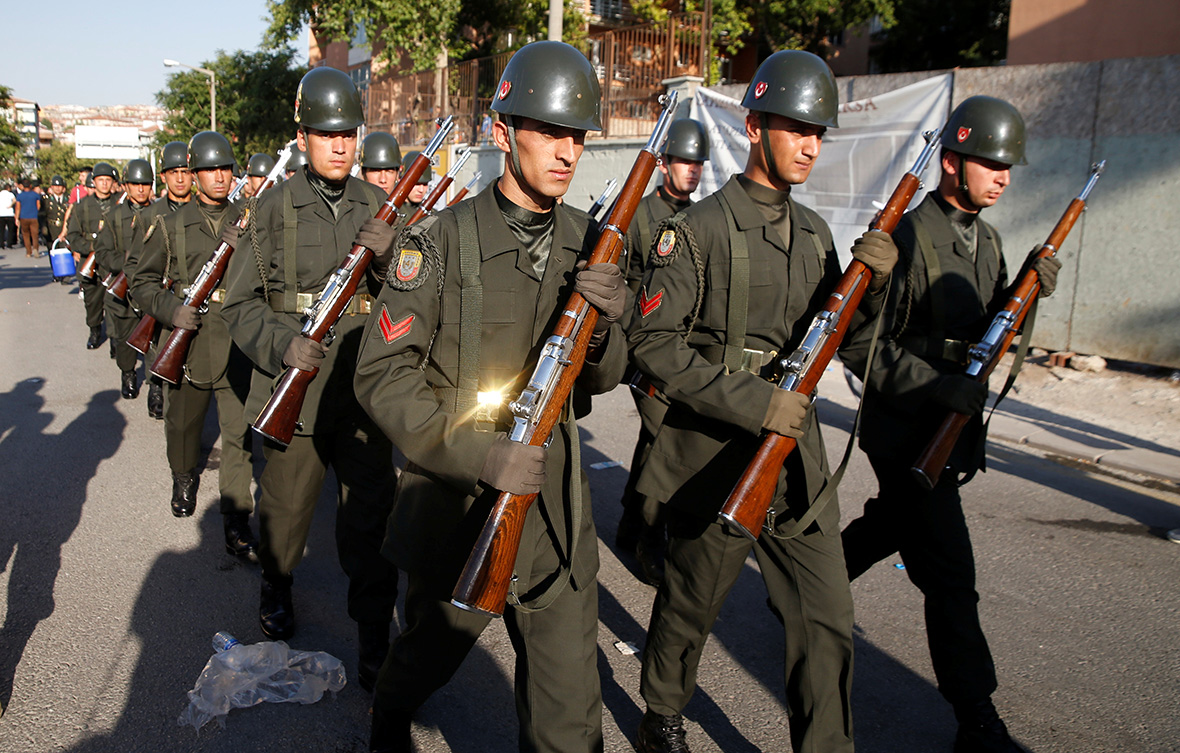 Turkey’s military has historically acted as a counter balance to politicians who start to lean too heavily toward Islam. The military has directly intervened in Turkish politics three times since 1971. They see themselves as guardians of the secular state created by Mustafa Kemal Ataturk in 1923.

Since taking power in 2002, the AKP—Turkey’s largest political party—has introduced measures which move Turkey away from its secular foundation. Although 97.8% of the Turkish population identifies as Muslim, many of them do not practice the faith. Under the AKP, the number of children in Islamic schools has swelled from 63,000 to over 1 million.

The purge of the military is seen as an attempt by Erdogan to rid the last of the secular resistance to a more Islamist state.

Turkey holds a very important card which is akin to a biological weapon. That card is the 3 million refugees Turkey currently houses.

Turkey and the EU made a deal where Turkey agreed to stem the flow of refugees leaving its shores for Greece. In return, the EU agreed to give Turkey €3 billion a year for its troubles and visa-free travel to the Schengen area for all Turkish citizens.

Since the agreement came into effect in March 2016, the number of refugees entering Greece has dropped 90%. The EU has so far paid the first tranche of funds, but what about that visa-free travel promise?

Erdogan’s purge has cast doubt over the deal. The EU has taken a hard-line stance against his actions. Given the recent spate of Islamic terror attacks across Europe, the last thing the EU wants is more refugees streaming in its direction.

An increasingly Islamic and authoritarian Turkey is a Turkey at odds with traditional European values. Turkey has the EU between a rock and a hard place regarding the refugee crisis, and something has to give.

If the EU elects to sever talks with Turkey, the Erdogan regime has said it will ‘’unleash the refugees’’ on Europe. This will leave the 3 million migrants currently housed there free to cross the Aegean Sea to Greece. Scenes of last summer’s wave of refugee-laden rafts are surely haunting EU bureaucrats.

If the EU decides to proceed with the deal, the outcome is not too different. It would give 70+ million Muslims visa-free travel throughout Europe. Turkey borders Iran, Iraq, and Syria—not exactly the countries I think of when I hear “Eurozone.” This deal would mean easier access to mainland Europe for the citizens of such countries.

It is estimated that upwards of 15 million Turks would emigrate to Europe within the first 10 years of the deal. This would greatly suppress wages in Europe. The per capita GDP of Turkey is €10,500, 65% lower than the Eurozone average.

The EU is locked in a game of “Deal or No Deal.” Either way, the EU loses. However, it can still save its citizens and heritage with one decision: re-establish borders.

Hungary made this decision in June 2015. Within one week, the number entering the country per day dropped from 6,353 to 29.

This decision would violate the Schengen Agreement and simultaneously end the EU as we know it. It would also mean an end to Europe’s immigration crisis.

History does not repeat itself, but it often sounds like Melania Trump’s and Michelle Obama’s convention speeches. Today, we have a situation that sounds like the 1683 Battle of Vienna. Will Europe choose to defend itself against the invaders as it did then?

The failed coup—cast as an act of terrorism by Erdogan—was in fact an attempt by the military to uphold the founding secular values of the Turkish Republic.

Ataturk will be turning in his grave.