Home » Manchet 1 » Turkish Activists to Erdogan: “Journalists are not terrorists”! 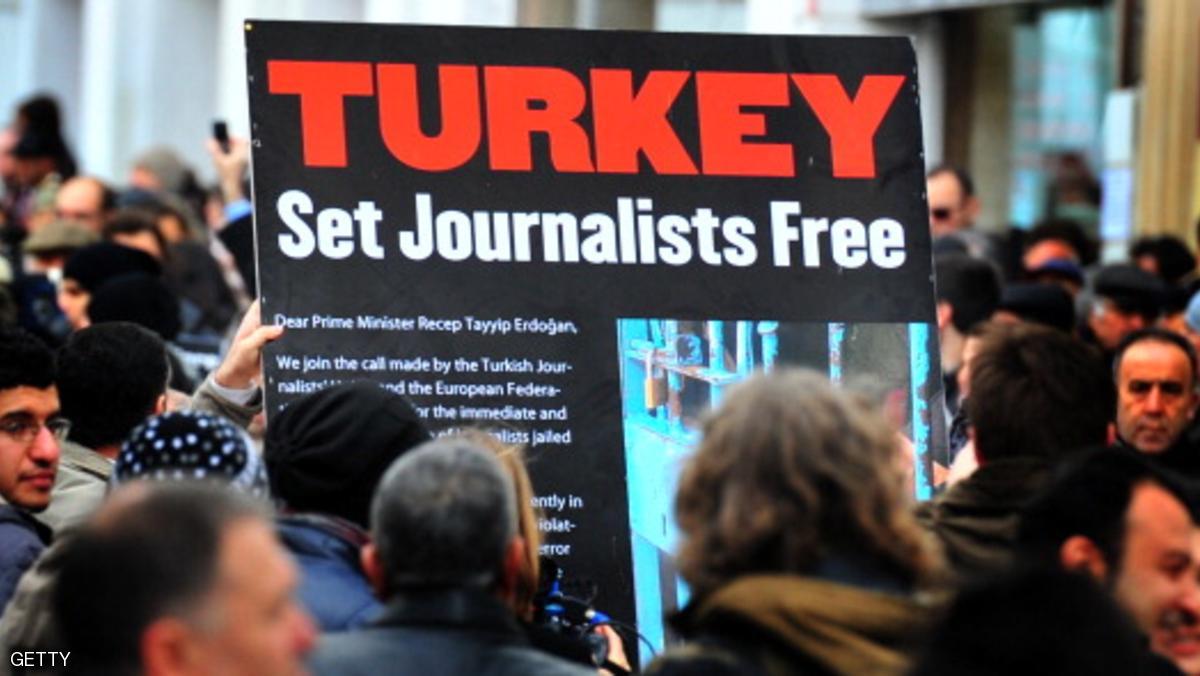 Turkish Activists to Erdogan: “Journalists are not terrorists”!

“Journalists are not terrorists”; this was the most used phrase by Turkish activists on social media accounts today, after Turkish authorities issued arrest warrants for over 40 journalists in a new phase of the controversial legal crackdown after the failed coup. Erdogan’s government had been under fire even before the failed putsch for restricting press freedoms in Turkey, accusations the authorities strongly deny.

On the other hand, the crackdown has raised tensions with the European Union, further hampering Ankara’s stalled membership bid, while a potential diplomatic crisis with Washington is looming if the United States refuses to extradite Gulen to Turkey.

Istanbul anti-terror prosecutors issued arrest warrants for 42 journalists as part of the investigation into the failed coup, the state-run “Anadolu” news agency said. Among those targeted by the warrants were prominent journalist Nazli Ilicak who was fired from the pro-government “Sabah daily” in 2013 for criticizing ministers caught up in a corruption scandal, it added.

Five people have been detained so far although 11 of the suspects are believed to already be outside the country, the “Dogan” news agency said. Police were searching for Ilicak in the holiday resort of Bodrum.

Over 13,000 people have been detained so far in a vast sweep in the wake of the July 15 coup bid, which the authorities blame on the reclusive US-based Islamic cleric Fethullah Gulen.

One of the most trending hashtags on Twitter today was #Nazli Ilicak, one of the Turkish journalists to be detained. Ilicak entered journalism after her father’s death in 1972.

After working in various posts at Tercüman, she became publisher of the tabloid Bulvar. She later wrote for the newspapers Meydan,Hürriyet, Akşam, Yeni Şafak, Takvim, Sabah and Bugün. Ilıcak, and a dozen other prominent journalists lost their jobs in 2014 because they criticized the government.

These are some of the tweets supporting her:

This tweet mentioned that the journalist ran away to Greece:

Another renowned journalists, to be detained by Turkish authorities are:

List of Turkish journalists to be detained. Many of them are good friends of mine. pic.twitter.com/iAqxWxYCL8

On the other hand, Amnesty International mentioned on its website that “it has gathered credible evidence that detainees in Turkey are being subjected to beatings and torture, including rape, in official and unofficial detention centres in the country,” adding that “the organization is calling for independent monitors to be given immediate access to detainees in all facilities in the wake of the coup attempt, which include police headquarters, sports centres and courthouses. More than 10,000 people have been detained since the failed coup”.

Amnesty International mentioned that it has credible reports that Turkish police in Ankara and Istanbul are holding detainees in stress positions for up to 48 hours, denying them food, water and medical treatment, and verbally abusing and threatening them. In the worst cases some have been subjected to severe beatings and torture, including rape.

“Reports of abuse including beatings and rape in detention are extremely alarming, especially given the scale of detentions that we have seen in the past week. The grim details that we have documented are just a snapshot of the abuses that might be happening in places of detention,” said Amnesty International’s Europe director John Dalhuisen.

“It is absolutely imperative that the Turkish authorities halt these abhorrent practices and allow international monitors to visit all these detainees in the places they are being held.”

Detainees are being arbitrarily held, including in informal places of detention. They have been denied access to lawyers and family members and have not been properly informed of the charges against them, undermining their right to a fair trial.

On Saturday the Turkish government issued its first decree under new powers authorised by its declaration of a state of emergency. The decree dramatically increases the amount of time detainees can be held without being charged from four to 30 days. The change risks exposing detainees to further torture and other ill-treatment. The decree also provides for officials to observe or even record meetings between pre-trial detainees and lawyers, and detainees are restricted in who they can choose to represent them, further undermining the right to a fair trial.

Arrested Journalists in Turkey in the past few years:

There are many more journalists that were arrested, apart from this list. Click here to view them.

While all this was happening…

Amid all the news about detaining journalists, we were trying to contact many Turkish journalists, but their social media accounts seemed to be closed. “Russia-Now” contacted Mohamad Najem, Co-Director at “Social Media Exchange” (SMEX) in order to know more about this issue.

Najem, forwarded an e-mail to us, which includes information on internet blocking in several countries, including Turkey. It was prepared by Deji, one of the members of “Access Now”, which Mohamad Najem is also part of. The e-mail included links to articles mentioning how people get affected by internet shutdowns.

An article by The Guardian  published on the 16th of July mentioned that “Turkey may be blocking or slowing access to social media networks amid an attempted military coup, although there are conflicting reports emerging from a country that’s been described as a “bastion of internet censorship” by the Electronic Frontier Foundation”.

“Our data indicated a 2 hour period of social media throttling but no evidence of a full internet blackout in #Turkey,” the group subsequently tweeted. Facebook and Twitter users confirmed the service had been inaccessible but had since returned, albeit slowly.

Internet censorship in Turkey typically occurs when the government orders internet service providers to block access to certain domains, according to Deji Olukotun of Access Now, a digital rights advocacy group. Olukotun confirmed to the Guardian that social media sites have been subject to “intentional disruptions”. He added that technologists could distinguish between outages due to such “manipulation” and outages due to a surges in use that may occur during crises.

Gustaf Björksten, chief technologist for Access Now, cautioned that his organization did not yet have “conclusive results” or proof of government censorship.

“As governments and the carriers get more skilled at implementing network interference, they move toward tactics that are more difficult to prove … the picture in Turkey right now is far from clear to us,” he said.

“We have no reason to think we’ve been fully blocked in #Turkey, but we suspect there is an intentional slowing of our traffic in country,” Twitter said via its @policy account.

A spokesperson for YouTube denied that its service had been impacted, stating: “We are aware of reports that YouTube is down in Turkey, however, systems seem to be functioning normally.”