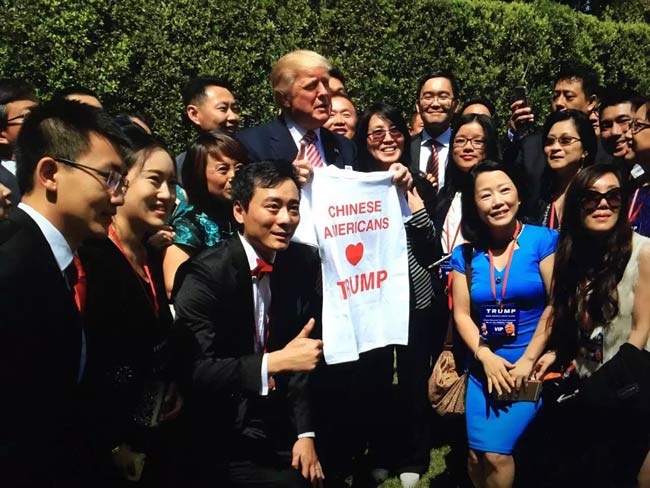 As the 2016 Republican National Convention draws to a close, a Chinese-American organization has vowed to keep fighting for the Republican presidential nominee Donald Trump’s vision. Part of the motivation of the group, which calls itself Chinese Americans for Trump (CAFT), is to set an example for overseas Chinese to be more active in politics.

“We will fight for America in the upcoming election and beyond. We will fight indefinitely for the Chinese-American core values and the conservative values of the GOP. We will fight for Mr. Trump’s vision for America: to bring back a time when Americans were able to dream big and do great things,” said David Wang Tian, founder of CAFT, at the Asian Pacific American National Forum on the sidelines of the RNC in Cleveland, Ohio. The forum took place on July 21 local time.

Wang told People’s Daily Online that discrimination is still widespread, and there are many Chinese-American watchdog groups drawing attention to that discrimination. One such case involves the Jimmy Kimmel Live! show, whose host’s comments allegedly discriminated against Chinese Americans and made light of the manslaughter conviction handed down to NYPD officer Peter Liang.

Sun Chenghao, an assistant research fellow at the Institute of American Studies of the China Institute of Contemporary International Relations, told People’s Daily Online that Chinese Americans are increasingly aware of the need to speak out and advocate for themselves in the U.S., where there are many legal channels available to do just that. Included in those channels is participation in the upcoming election.

“Chinese Americans used to play a less influential role in politics than other Asian Americans, possibly because Chinese people are less inclined to express themselves. But with the growing number of Chinese Americans in the country, where ethnic conflicts are increasingly obvious, it is necessary to protect their interests,” Sun said.

Wang said that he is not aware of any Chinese Americans currently involved with the Hillary Clinton campaign.

“We believe that Hillary Clinton represents the old, broken Washington, plagued with corruption and gridlock,” Wang said at the July 21 forum. “A vote for Donald Trump, on the other hand, is a vote for real change that can bring back the core values of America, which made our nation the most powerful and prosperous country in the world.”

Founded in 2015, CAFT is a group of over 5,000 Chinese Americans. It is the biggest and most active Asian support organization for Trump. The organization has held voter outreach programs and planning rallies and fundraising activities for Trump’s campaign in more than 28 states, according to Wang.

He said some CAFT representatives were even invited to a meeting with Trump at Trump’s home in California several months ago. Trump, who Wang described as “amiable,” issued the invitation in order to express his appreciation for CAFT’s contributions to his campaign.