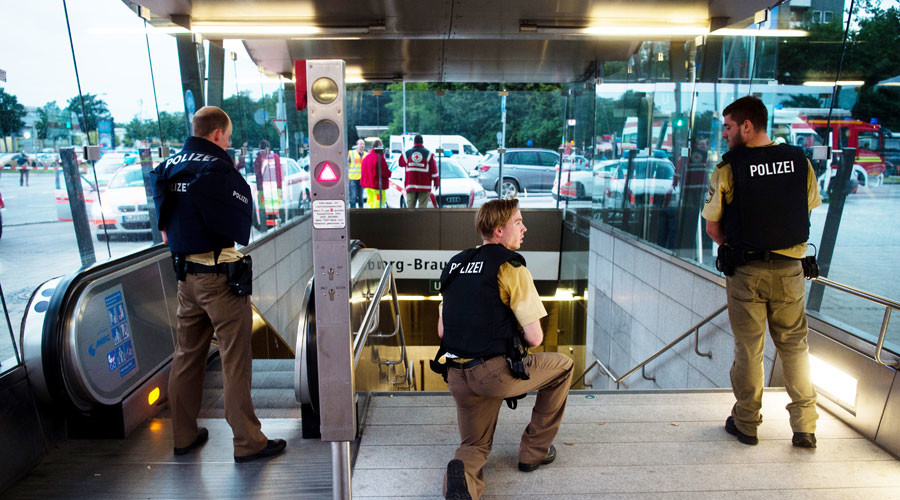 Several people were killed on Friday (Jul 22) in a shooting rampage in a Munich shopping centre and the attacker or attackers are still at large, police said.

The Bild newspaper reported that the gunman ran through the mall near the Olympic stadium in the southern German city, firing on several people before fleeing in the direction of a nearby metro station.

Authorities were evacuating people from the Olympia mall but many others were hiding inside. The Bavarian Interior Ministry said three people were dead, NTV television reported. A Munich police spokeswoman said multiple people were killed or wounded.

“We believe we are dealing with a shooting rampage,” the spokeswoman said. More than one gunman was believed to be involved and no one had been arrested, she said.

The Munich police Facebook page said witnesses had reported seeing three different gunmen. Those witnesses also said there was shooting in nearby streets as well as inside the Olympia shopping mall.

Europe has been on alert for terrorism in the wake of a string of attacks including bombings in neighbouring France and Belgium.

The OEZ shopping centre was surrounded by armed police who were hunting for the attacker, while a helicopter flew overhead.

“There is a major police operation under way in the shopping centre,” Munich police said on Twitter, urging people to avoid the area.

“Attention – avoid the neighbourhood around the OEZ. Stay in your homes. Leave the street,” the Munich police tweet said.

Emergency vehicles were seen in the streets outside, as passers-by looked on.

The shopping centre is next to the Munich Olympic stadium, where the Palestinian militant group Black September took 11 Israeli athletes hostage and eventually killed them during the 1972 Olympic Games.

NTV television reported that German police special forces had arrived at the scene. It was not immediately clear who carried out the attack.

Staff in the mall were still in hiding, an employee told Reuters by telephone. “Many shots were fired, I can’t say how many but it’s been a lot,” the employee, who declined to be identified, said from the mall in Munich.

“All the people from outside came streaming into the store and I only saw one person on the ground who was so severely injured that he definitely didn’t survive. We have no further information, we’re just staying in the back in the storage rooms. No police have approached us yet.”

The shooting comes just days after a teenage asylum seeker went on the rampage with an axe and a knife on a regional train in Germany on Monday, injuring five people, two of them critically.

Interior Minister Thomas de Maiziere said the teenager was believed to be a “lone wolf” attacker who appeared to have been “inspired” by the Islamic State group but was not a member of the militant network.

Authorities said he shouted “Allahu akbar” (God is greatest) three times as he rampaged through the train carriage. The attacker is believed to be either Afghan or Pakistani and investigators are still trying to determine his identity.

German Justice Minister Heiko Maas told Bild newspaper’s Friday edition before the mall attack that there was “no reason to panic but it’s clear that Germany remains a possible target”.

Police secure the area inside the shopping centre. At least one person has been killed and 10 wounded in a shooting at a shopping centre in Munich on Friday, German police said. / AFP PHOTO / STR

The train rampage triggered calls for Germany to impose an upper limit on the number of refugees coming into the country.

The assailant had arrived as an unaccompanied minor in Germany in June 2015 and had been staying with a foster family in the region of the attack for the last two weeks.

A record 1.1 million migrants and refugees were let in to Germany last year, with Syrians making up the largest group followed by Afghans.

In the latest attack in France, 31-year-old Mohamed Lahouaiej Bouhlel used a truck to mow down 84 people, including children, in the Riviera city of Nice last week.

It was the third major attack on French soil in the past 18 months, after the militant carnage in Paris in November and the shootings at satirical magazine Charlie Hebdo and a kosher supermarket in January 2015.

Friday is also the five-year anniversary of the massacre by Anders Behring Breivik in Norway. Breivik is a hero for far-right extremists in Europe and America.