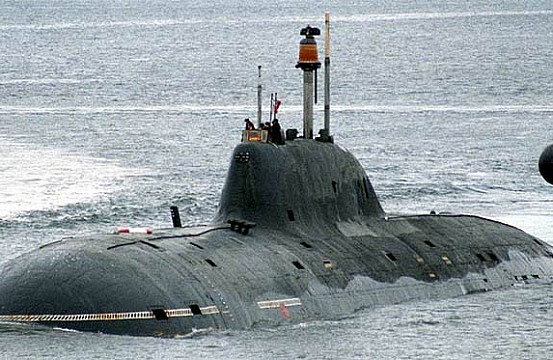 Russian submarines are operating in the Pacific at levels not seen in decades. For the first time since the Cold War, the Russian Pacific Fleet is getting submarines that are quieter, better armed and have greater range.

Russia’s Saint George nuclear submarine arrives at base after a mission in May. Photo courtesy of the Ministry of Defense of the Russia Federation

According to a study titled “Russia’s Asian Rebalance” by Australia’s Lowy Institute for International Policy, Russia’s pivot to Asia is resulting in a large-scale revamp of its Pacific fleet, which over the next decade will go from its smallest to its biggest naval asset.

“New hunter-killer and ballistic missile submarines have been earmarked for the fleet, which will provide significant heft to Moscow’s power projection aspirations,” the study says. “Russia will be operating its new Borei-class SSBNs from its newly upgraded Pacific base on the Kamchatka Peninsula. Its six new Yasen-class guided missile submarines are expected to begin entering service in 2017, and it is upgrading its existing Akula, Oscar and Sierra platforms.”

According to Russian military analyst Dmitry Gorenburg, “The Pacific Fleet is likely to become Russia’s largest fleet over the next decade in recognition of the region’s increasing geopolitical importance and the concentration of naval powers in the region.”

During the Cold War, the Soviet Navy was known for its mega weapons such as the Typhoon class submarine. With a displacement of 48,000 tons it was almost as large as an aircraft carrier and dwarfed the largest U.S. Navy submarine by nearly 20,000 tons. This Soviet leviathan could rain 200 nuclear warheads down on enemy cities and military installations in a single barrage. However, as the Cold War ended, these majestic vessels proved incapable of adapting to the new era of cost cuts.

With the revamp and strengthening of the fleet, the focus is now on expanding the fleet, especially with the Borei class submarine. Although it is less than half the size of a Typhoon, the Borei is a major break from the Soviet Navy school of submarine warfare. The Borei class represents the new generation of extremely quiet Russian submarines, which are more survivable in the undersea theater. Besides being cheaper to run, they also require far fewer crewmembers. At the same time, they do not lack firepower, and are able to launch 16-20 nuclear missiles, with up to eight independently retargeted warheads.

Russia expects to replace its Cold War subs with a total of 12 Borei SSBNs, says Gorenburg. “Eight are already contracted to be built in the next few years, with another four expected to be ordered in the next decade. The new subs are likely to be an updated version of the current Borei II subclass, with improved electronics and other updated components. The navy plans to locate six in the Northern Fleet and six in the Pacific Fleet.”

The Kuzbass, a multirole Akula-class attack submarine, is another formidable vessel Russia is introducing in its fleet. To increase stealth, the sub carries a two-tier anti-vibration mechanism. All the units are placed on elastic foundations and each one is separated from the next by pneumatic shock absorbers. This helps lessen the impact of underwater blasts on the sub’s mechanisms and crew. Currently completing sea trials, it will soon resume active duty with the Pacific Fleet.

The increase in the size, firepower and reach of Russian submarines is in step with Russia’s re-rise. Throughout the Cold War, the U.S. Navy was fond of boasting that its subs were a lot quieter, which the secretive Soviets never bothered to rebut. However, with the opening up of Russia, the true capabilities of Russian submarines are coming out into the open. Russian submariners often tell tall tales about how they have almost scratched the underbellies of U.S. ships without the Americans even knowing. They may be closer to the truth than experts imagine.

Adm. Mark Ferguson, commander of U.S. Naval Forces in Europe, told CNN that Russia has been deploying combat submarines and missiles in scales that America has issues keeping pace with. Moscow is deploying new submarines that are harder for the American Navy to track and detect.

They are quieter, better armed and have a greater range of operation, noted Ferguson. “The submarines we’re seeing are much more stealthy. We’re seeing [the Russians] have more advanced weapons systems, missile systems that can attack land at long ranges, and we also see their operating proficiency is getting better as they range farther from home waters.”

There is now a plan to develop a new multipurpose nuclear submarine class, with the goal of building something cheaper and smaller than the Yasen class. This would be an attack submarine with decreased missile armament, comparable to the American Virginia class. The Russian Navy hopes to begin construction of these subs as early as 2016, with the goal of building a total of 16-18 of them.

Meanwhile, the U.S. Navy has 53 submarines in its inventory, but because of decommissioning and budget decisions, that figure will drop to 41 by the late 2020s.

For decades, Russian and American subs have conducted a game of cat and mouse under the oceans. Now it appears it doesn’t matter how quiet the U.S. Navy subs are, the Russians can catch them.

A Strategy Page report dated Feb. 18, 2015 says: “In early 2014, U.S. Navy submarine detection experts got a scare when a Russian Vishnya class AGI [Auxiliary General Intelligence, or electronic reconnaissance] ship was seen several times off the east coast of Florida, in the vicinity of naval air and submarine bases. The Vishnya spotted off Florida was accompanied by a sea-going tug. Both ships used Cuban ports for resupply. The two ships apparently first showed up in Cuba in February.

“What scared the submarine detection crowd was the recent realization that computers had become cheap and powerful enough to make it possible to detect submarines via the faint signs (like disturbance of the surface waters above them) that they leave. It has been known for decades that these telltale signs existed and that with sufficient computing power and sensitive enough sensors you could use this method to track submarines in real time.

“In other words, it no longer mattered how quiet a sub was, just whether it was there or not and moving. U.S. Navy experts had been doing the math and realized the time was rapidly approaching, if not already here, when the sensors were sensitive enough and the computers fast enough to unmask all current subs. All this sort of thing is generally known in academic circles but exactly what the navy or intel agencies know is top secret. It is believed that the Russians have, for decades, done a lot of theoretical work in this area. Since the early 1990s, Russia has had access to the fastest computer tech and latest commercial sensor technology. Thus on paper this puts the Russians very close to a breakthrough.”

During the Cold War, the bulk of Russia’s submarine force in the Pacific comprised attack submarines. Designed to find and kill enemy subs, their primary task was to prevent enemy SSBNs from launching a nuclear assault and kill enemy fast attack submarines before they found Russian SSBNs. In the 21st century undersea theater, the Pacific Fleet will be a more rounded fleet with a larger proportion of SSBNs – just enough to keep the Americans on their toes.