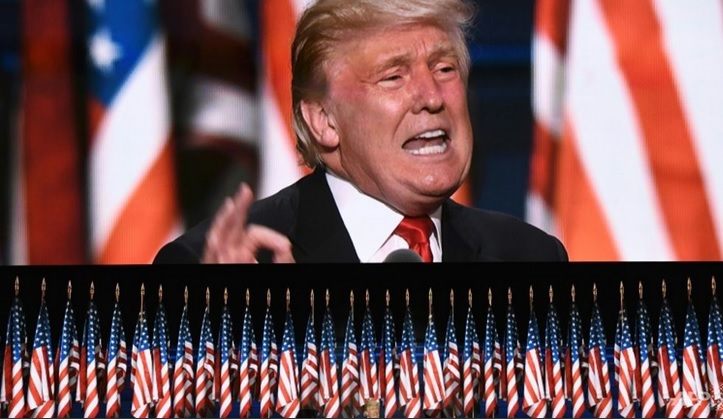 Donald Trump rallied Republicans by vowing he alone could fix a nation adrift in a dangerous world, storming into an election showdown with Hillary Clinton, the presumptive Democratic nominee determined to become America’s first woman president.

The billionaire and former reality TV star electrified the Republican National Convention by delivering the speech of his life, promising to restore security, clamp down on immigration and put America first.

Nationwide polls suggest the New York mogul, who has never held elected office, is almost neck and neck Clinton, the former secretary of state mired in an email scandal yet propelled by ardent fundraisers.

A CNN straw poll suggested that 75 per cent of respondents found Trump’s speech positive and 56 per cent were more likely to vote for him – balanced out by 42 per cent either less likely or unmoved.

But eyes will now pivot to Clinton. She is expected to unveil her pick for vice president by Saturday, then accept the Democratic nomination at her party’s convention in Philadelphia next week.

Between chants of “U-S-A” and “Trump, Trump, Trump,” the Republican’s candidate cast himself as the “law and order candidate” who would champion “people who work hard but no longer have a voice.”

“I am your voice,” he declared pointing into the cameras, promising better times with “millions of new jobs and trillions in new wealth.”

Exploiting angst over racially-tinged shootings and seemingly indiscriminate attacks, Trump offered a tough-on-crime message that was reminiscent of Richard Nixon’s election-winning strategy in 1968.

Dayna Dent, 69, a retiree and alternate delegate from Washington state told AFP she was “thrilled” by the speech. “I think Donald is very real, and I like that about him,” she said.

But speaking for over an hour, he also stuck to many of the hard right themes from a bruising primary campaign, showing why he is one of the most controversial US politicians in living memory.

Foreigners from terror-linked countries would be banned, a wall built on the Mexican border and trade deals ripped up and renegotiated.

“I alone can fix it,” he claimed, not impressing Democrats.

“We are better than this,” tweeted Clinton.

“Is this guy running for president or dictator?'” he tweeted.

This, a Trump top aide remarked, is now the “party of Trump.” Many of the Republican old guard had stayed away, including both former presidents Bush.

Daniel Carter, an Ohio delegate and lawyer who originally wanted Ohio Governor John Kasich to win the nomination, said he would now be working to get Trump into the White House.

“For the most part everyone’s, ‘Come on lets get this guy elected,'” he said. “We certainly don’t want Hillary Clinton.”

When the former first lady formally accepts the Democratic nomination next week, it will be the highlight of her more than three-decade career in public service.

Trump painted her as corrupt, incompetent and hopelessly out of touch. “Death, destruction, terrorism and weakness,” he said of her legacy.

While Trump went with experience, steadiness, and rock-solid conservative credentials in picking Mike Pence to join his ticket, the deeply experienced Clinton needs other skills in a vice president.

Tim Kaine, senator from Virginia, comes from a battleground state, speaks Spanish and is a southern white man who might put independent male voters at ease.

Tom Vilsack, from Pittsburgh and known to the Clintons for years, could help in the crucial swing state of Pennsylvania. As a former two-term governor of Iowa, can woo rural American voters.

Tom Perez, labor secretary and a liberal, could heal the rift with left-leaning supporters of Sanders and as a Latin, cement the increasingly important Hispanic vote.

It remains unclear if antipathy towards Clinton will be enough to unite a Republican Party riven with doubts over his candidature.

Warming up the crowd before Trump took to the stage, his daughter Ivanka tried to soften her father’s image.

“My father not only has the strength and ability necessary to be the next president, but also the kindness and compassion,” she said.