Home » Manchet 4 » The Russian Air Force Is Back: Stealth, Su-35s and Syria 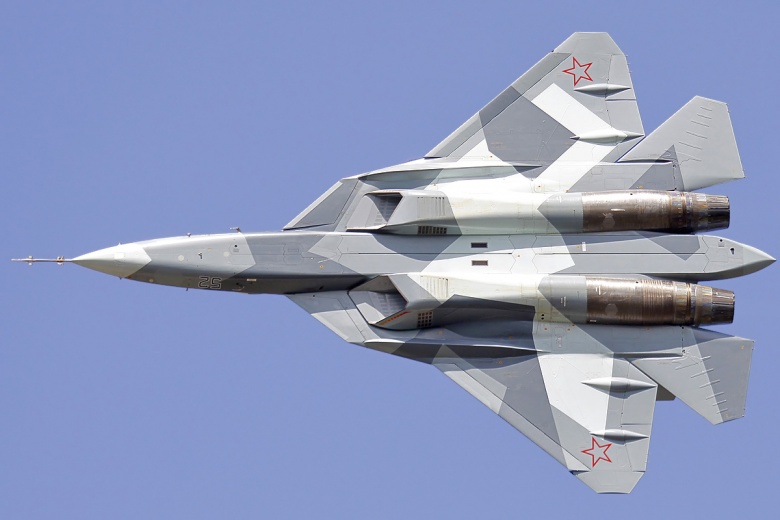 The Russian Air Force Is Back: Stealth, Su-35s and Syria

Derivatives of the Sukhoi Su-27 Flanker will continue to serve as the backbone of Russia’s tactical fighter force for the foreseeable future. Other aircraft such as Sukhoi’s new PAK–FA fifth-generation stealth fighter will play a niche role—serving to sustain technology development efforts and Russia’s industrial base. But modernization is proceeding slowly due to the lack of adequate funds. Nonetheless, the Russian Air Force has recovered from its post-Soviet low in the 1990s.

For the Russian Air Force, the Su-30SM is the most important Flanker variant. The flexible, multi role two-person fighter can perform a variety of roles ranging from interdiction to air superiority to maritime strike. Moreover, the jet’s sophisticated avionics, range and a diverse payload offers the Russian Air Force immense capability—especially during complex air operations where the second crewman is a boon. “The Su-30SM is like their version of the F-15E,” Michael Kofman, a research scientist specializing in Russian military affairs at CNA Corporation told The National Interest.

The single-seat Su-35S—which in some ways is more advanced than the Su-30SM—will focus much more on the air superiority role, Kofman said. The Su-35S likely represents the ultimate incarnation of the venerable Flanker airframe design. The jet has been upgraded with a powerful Irbis-E passive electronically scanned radar (PESA), new electro-optical/ infra-red scanners, data-links, a host of other upgrades and a vast arsenal of weapons. The Su-35 also features a lighter airframe combined a pair of upgraded AL-41F1S engines with three-dimensional thrust vectoring—which affords it excellent aerodynamic performance. “Nothing  can touch the F-22. It’s not stealth, but the Flanker is an exceptional airframe.” Kofman said.

The technology for the Su-35S is also being used to effectively prototype systems for the next-generation PAK-FA fifth-generation stealth fighter. The problem for the Russians stems from the lost decade of the 1990s when funding for research and development ground to a halt in the aftermath of the Soviet collapse. Engines are always the most difficult and time consuming part of developing a new aircraft and Russia got off to a late start in developing a suitable motor for the new jet. Ultimately, though, the Russians will probably succeed. “They have the technology and the engineering skills,” Kofman said.

While Sukhoi has more or less dominated the Russian fighter industry since the end of the Cold War, RSK-MIG is still developing derivatives of the MiG-29 Fulcrum. The latest iteration of the Fulcrum is the MiG-35, which offers similar features as the larger advanced Flanker derivatives. The Russian Air Force is buying about 30 of the new variant—mostly to keep the production line alive in the hopes of securing exports, Kofman said. The Russian Navy, too, is buying a handful of MiG-29K models to replace its Su-33 Flankers.

But while the Russian Air Force is receiving highly-capable new aircraft like the Su-30SM, Su-35S and Su-34, it is not receiving huge numbers of those new aircraft at once. The Russians are taking delivery of tens of these new aircraft over a number of years to replace the hundreds of Soviet-era jets that are currently in service. Moreover, the Russian Air Force in encumbered by having to accept aircraft like the Su-30M2 and MiG-35 purely for the sake of keeping the aircraft manufacturers up and running. Thus, Russia is running a parallel program to upgrades its older Su-27s and MiG-29s to modern standards. Once example is the Su-27SM3—which brings the original Flanker air superiority fighter to a level almost on par with the latest Su-30SMs and Su-35S. Meanwhile, the MiG-29 fleet continues to round out the low-end of the Russia’s tactical aviation fleet with only modest upgrades.

Another issue is that while the Russian Air Force is receiving new aircraft with good radars (most of the new jets have a PESA but active electronically scanned array (AESA) are in the pipeline onboard the MiG-35, for example) and excellent electronic warfare suites, the Russian Air Force still lacks good electro-optical/infrared targeting pods comparable to the U.S. Air Force’s Sniper or U.S. Navy ATFLIR pod. Moreover, precision guided weapons comparable to the Joint Direct Attack Munition are still comparatively rare in the Russian arsenal as the Syrian experience has demonstrated. But the Russians are aware of these deficiencies and are working on correcting the problem. Indeed, new targeting pods are nearing production.

Effectively, the current Russian Air Force leveraged late Soviet-era investments in advanced technology to field capabilities that had previously been reserved for Western air forces—such precision guided munitions and long-range strike. Moreover, the Syrian operation showed that the Russian forces have reached a level of proficiency where they can generate sustain sorties from an expeditionary base far from home. Indeed, the Russian Air Force will likely continue to incorporate lessons learned from Syria and continue to improve as time goes on. Thus, while not as large as its Soviet predecessor, the current Russian Air Force is in some ways more capable—its crews are better trained and it has much improved technology at its disposal. The question is really how quickly can Moscow afford to modernize given the state of the Russian economy.