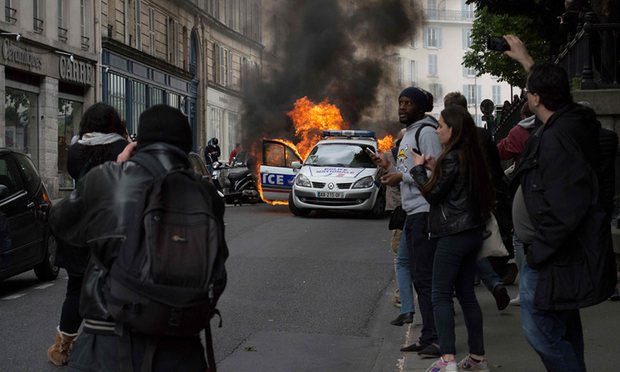 Protesters angered by the death of a man in police hands earlier this week burned cars and garbage bins in an area north of Paris overnight, but tension seemed to be easing despite a third night of unrest, a local official said on Friday (July 22).

The protests started on Tuesday night when 24-year-old Adama Traore died while being driven to a police station following his arrest over an altercation in the Val d’Oise area around 40 km (25 miles) north of the French capital.

Members of his family said he appeared to have been killed by police. An autopsy found no trace of significant violence on the body of the man but found he had been suffering from a “very serious infection”, according to a justice official.

Jean-Simon Merandat, chief of staff to the Val d’Oise police prefect, said family and friends of the dead man were planning a street march later on Friday and that local authorities were liaising with them on the matter.

“Things are pointing towards an easing of tension,” he said, adding that five arrests were made but nobody put in custody.

Earlier this week, a crowd of around 200 threw petrol bombs at police and public buildings.

Traore was arrested after an altercation with police when they went looking for his brother over a petty crime case.

About 180 police have been deployed to restore calm, five of whom were slightly hurt on Tuesday when someone opened fire on them with what Merandat said was probably a hunting weapon.

Weeks of rioting erupted in Paris’s often grim suburbs in 2005 after the death of youths who were electrocuted when they hid from police in a power generation hub.

An independence ombudsman said in a statement on Thursday that it had been asked to pursue the matter and that an inquiry would be opened to examine the police handling of the affair.