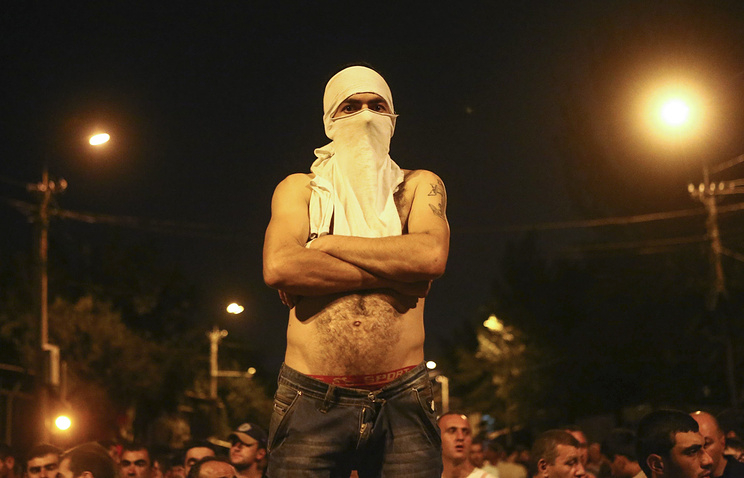 Armenian opposition forces has staged a rally in the capital Yerevan near the police regiment seized by gunmen on Sunday (July 17) where they are still holding hostages.

On Wednesday night, police and protesters clashed leaving 51 people, with 29 police officers among them, injured. At dawn the police troops dispersed the crowd, detaining 136 opposition activists.

The protesters call the gunmen ‘heroes’ and demand to rule out any force operation against them. The speakers call on the compatriots “to leave homes and come here.” The rally is peaceful, however, some are making attempts to provoke the police.

Police troops are on alert at cordons around the encircled police station.

Thursday’s rally is held without Nikola Pashinyan, a member of the Armenian parliament, who told a news conference earlier in the day that the hostage-takers expressed their discontent with his leadership at the rallies. Pashinyan said: “I have never had any ambitions to either organize or coordinate the rallies,” and so he would not attend them unless protesters asked him to come.

The lawmaker thought it inadmissible that some people who came to Wednesday’s rally or addressed the audience “were drunk or drug intoxicated, used foul language and sparked brawls.” It “was done with the aim to provide the police with a chance to interfere,” he said adding he “was trying to restrain himself from calling the police.”

“We are supporters of a civilized, persistent and principled political and civil struggle,” he said noting he could not tolerate nearby people “of suspicious behavior and with suspicious goals.”

Besides, Pashinyan is uncertain “who is in the talks on behalf of the armed group” with the authorities, “who supplies them with information, who they are in contact with.”

Meanwhile, Pashinyan had the courage to cut short clashes on Wednesday.

“In half an hour I took the situation under control when thousands of police officers failed to handle it,” he said.