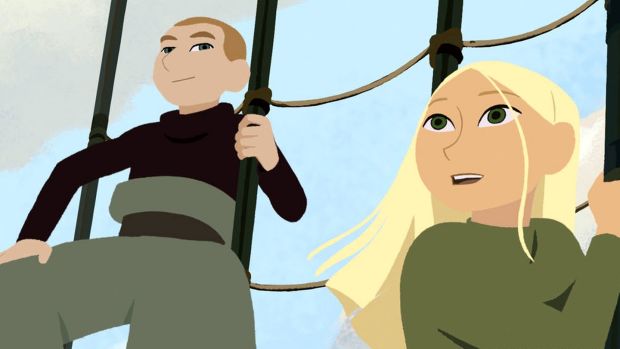 Long Way North is a beautiful, animated adventure in which a 15-year-old Russian girl runs away from home and journeys to the North Pole so that she might find her grandfather’s ship and save her family’s honour.

It’s 1882 and Sasha ought to be enjoying her first ball. Instead, the occasion causes a clash with the Tsar’s new scientific advisor, Prince Tomsky, who refuses to resume the search for her grandfather’s lost expedition. Sasha’s father Count Chernetsov, who is seeking to become the Russian Ambassador in Rome, is angered by his daughter’s undiplomatic behaviour. But the youngster is certain that she has discovered the correct route taken by Oloukine, the grandfather she adored. Thus, she leaves St Petersburg behind and, using one pair of earrings and considerable determination, makes her way toward the Arctic Sea.

Director Rémi Chayé worked in the animation department on The Secret of Kells, and Long Way North’s bold, clean lines and blocks of colours are as stylised and attractive as Tomm Moore’s Oscar-nominated films. Even the blurry whiteness of Arctic is appropriately menacing: Jack London would recognise this tough terrain.

The characterisation is particularly strong: the goal-driven, hard-working, clever and brave Sasha ultimately wins over even the most hard-hearted of navvies. Jonathan Morali’s score merrily switches from mournful cello to electropop, as our plucky heroine trades the aristocracy for chores in a dive-bar at the end of the world.

Unsurprisingly, the film won the Audience Award at the Annecy Film Festival. Can we divert you away from your third viewing of The Secret Life of Pets?

Information about the Film: