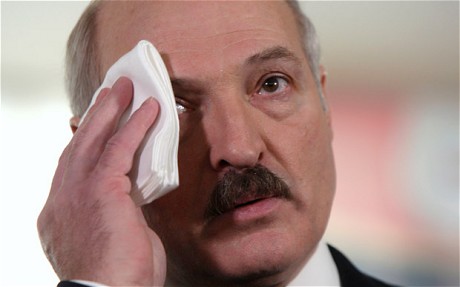 One would think that the developments of the past week in Turkey and Armenia – the countries located quite far from Belarus – have no direct impact on Minsk and its everyday life. However, the leadership of Belarus does not think so, as its seeming confidence yields to fear and concern for the future. The examples of Minsk’s old ex-friends Muammar Gaddafi, Saddam Hussein, Bashar al-Assad, Kurmanbek Bakiyev and others, many of whom are no longer alive, have come to mind of the Belarusian president making him think of his future.

The attempt of military coup in Turkey and then a quite strange and politically motivated hostage taking in Yerevan have once again reminded Alexander Lukashenko what may happen if he fails to keep the situation in his country under strict control. The Belarusian leader who has been closely following any even most insignificant display of disobedience in his country for more than two decades, could not but follow the ongoing developments in the countries having leaders like him. For the president of Belarus, it is a kind of litmus paper that helps him balancing between absolute dictatorship and rudiments of democracy. This is as never relevant now when Belarus has plunged into economic crisis caused by the political system once built by Lukashenko. While the national ideologists blame external factors for everything, the ordinary citizens blame the country’s leadership as they comprehend that the social-economic model of Belarus will collapse inevitably. Concerned over the situation, the president of Belarus seeks to not only keep his power but also prove everyone, and his minions, first, who is the master in the house.

Suffice it to say that immediately after the developments in Turkey and Armenia, Alexander Lukashenko urgently met with head of the State Security Committee of Belarus Valery Vakulchik and signed a decree on conscription of the reserve officers in the current year. All this means that Lukashenko is concerned over possible repetition of the Turkish and Armenian scenarios in Minsk. This is what he said during his meeting with the State Security Committee (KGB) head: “I cannot but be concerned about the situation unfolding around Belarus… The situation is grave. Whatever it may cost us we should preserve tranquility and peace in our country.” The president did not specify how particularly he is going to “preserve peace in Belarus,” but one can suppose that the leadership and the national security will be focusing on the government staff and the military.

The point is that the opposition in Belarus that could formally create tensions in the country is so weak now that no one considers it as a real threat to Lukashenko’s regime. Even the KGB admits that everything is peaceful in Belarus, as the local “fifth column” constitutes no danger to the regime. Another matter that the public may be influenced by external forces or sentiments may change among the military and statesmen. The West has been paying special attention to the state machinery recently, as it seeks to shake the foundation of the power in Belarus from inside. Suffice it to say that all the West-funded projects in the country are long-term and connected with the work of the government agencies. Amid Ankara’s statements that the coup attempt was inspirited from abroad, the Belarusian authorities cannot neglect such issues as loyalty of the government staff and the army. This means that the KGB has already been charged to inspect the Belarusian officials of various ranks. Actually, the country will see a new shake-up soon. This is quite natural a procedure for all the authoritarian regimes and it had been applied in Belarus many times before. The problem here is that the Belarusian government staff is so “clean” already that there is no longer anyone able to think and work for the country. Yet, the country’s leadership cares for its stable power rather than reasonable government of the country.

What makes the situation even stranger is “the call-up of up to 100 citizens of Belarus below 27, particularly, the reserve officers who did not serve in the army or in the reserve forces and have no right for draft exemption.” Considering the number of the “conscripts,” a logical question arises as to whether they really need that call-up. Many in Belarus say the reserve service is connected with the insufficient number of officers in the army. However, this is not important in the given case. Alexander Lukashenko plans to increase control over the military to prevent possible developments like the ones in Turkey. It is quite probable that those one hundred officers will be the most loyal and tested Belarusians who will be trained as political instructors for the army. It appears that the Belarusian army lacks officers able to explain the soldiers the advantages of the Belarusian regime. Yet, there is an interesting detail that proves that “call-up” is for a reason. It is not for the first time that reserve officers are drafted. Every time this coincides with problems in the countries the Belarus leader personally has warm relations with. For instance, a similar decree was signed in 2002 when a coup attempt was made in Venezuela that has friendly relations with Lukashenko and in 2005 during the Tulip revolution in Kyrgyzstan. Then the authorities in Belarus had fewer reasons to expect a coup in the country, as the situation in economy was more or less stable and the “Belarusian economic miracle” was at its height. Now Minsk is well aware that the situation is much more explosive amid the falling living standards in the country and the growing attention of the West to the country. Therefore, the top leadership of the country started taking preventive measures to keep the situation under control in future.