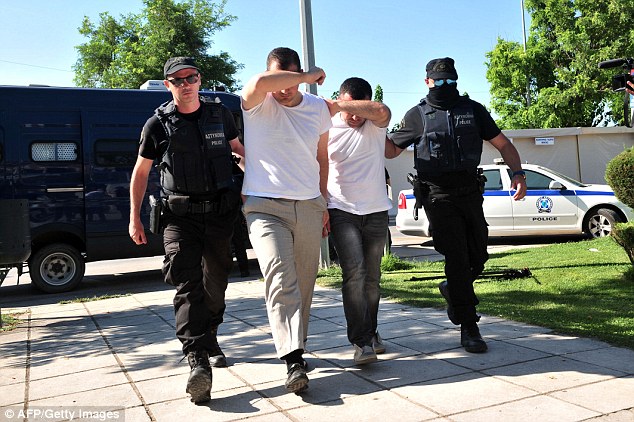 Eight Turkish military officers who fled to Greece after last week’s failed coup went on trial Thursday (Jul 21) for illegal entry in a case that threatens to strain ties between the NATO allies.

A Turkish military helicopter lands in the northern Greek city of Alexandroupolis with eight men on board who have requested political asylum after the attempted coup in Turkey, July 16, 2016.

The eight are being tried in the northern city of Alexandroupoli, where they arrived by military helicopter on Saturday after sending a distress signal to authorities.

If convicted, they face a sentence of up to five years in prison.

According to one of their lawyers, Ilia Marinaki, the soldiers – two commanders, four captains and two sergeants – fear for their safety and that of their families after the abortive bid to topple President Recep Tayyip Erdogan.

To block their deportation to Turkey, they have applied for asylum in Greece.

Whatever the court ruling on Thursday, any action on their fate will likely have to wait until early August when asylum authorities are to decide on their applications.

Turkish authorities insist they will receive fair treatment at home, despite widespread a retaliatory crackdown by Erdogan’s government.

Turkey’s ambassador has warned that failure to return the officers “will not help” ties.

“I hope we will manage to swiftly go through the phases of due process and manage to return these terrorist elements so that they will face justice,” Turkish ambassador Kerim Uras told reporters in Athens on Tuesday.

Historic foes, Greece and Turkey both became members of NATO in 1952. Ties have improved dramatically in recent years although there are irritants such as airspace and maritime border disputes.

Greece last year also faulted Turkey for allowing thousands of mainly Syrian refugees and migrants to sail to its shores, before an EU deal stemming the flow came into force in March.