Home » Manchet 1 » Russia Warned Turkey of military coup… But how did it know it was happening? 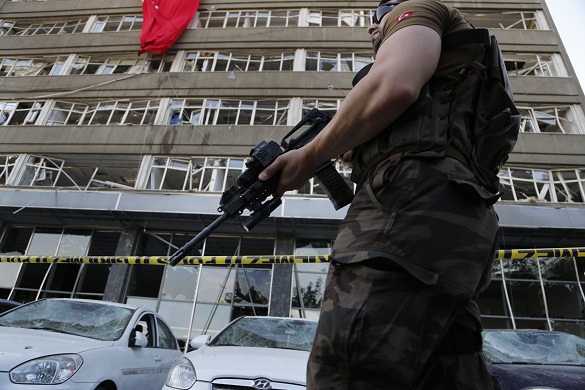 Russia Warned Turkey of military coup… But how did it know it was happening?

One of the main highlights today in the most renowned media outlets is that Russia has warned Turkey of the military coup attempt before it happened. But we cannot but ask how did Russia know about it? and how did the Turkish authorities act regarding this warning?

Here is a round on the different coverage of this topic in various Russian and Turkish media outlets:

TASS: Warning based on data from Russian Military

So the warning was basing on data that Russian military in the region received intercepting “highly sensitive army exchanges and encoded radio messages showing that the Turkish army was readying to stage a coup,” it went on.

In particular, they reportedly discussed plans to dispatch several army helicopters to the hotel (in Marmaris) where Erdogan stayed to arrest or kill him, it said.

“The diplomats were not sure of the Russian station that had intercepted the exchanges, but said the Russian army intelligence unit deployed in Khmeimim (also called Hmeimim) in Syria’s Northern province of Lattakia is reportedly equipped with state-of-the-art electronic and eavesdropping systems to gather highly sensitive information,” Fars said.

“Pravda”: How reliable is this information?

On the other hand, Pravda posed the question: How reliable is this information, and just as “TASS” did, it quoted “Fars news agency”, along with AlJazeera and the Turkish magazine “Nokta”. The Moscow Times also had a similar media coverage as that of TASS.

Pravda mentioned: “It is difficult to say, to which extent the information is reliable,” adding “However, as reported by Turkish magazine Nokta, the National Intelligence Organization (MIT) learned about the imminent coup several hours before it started”.

Details about the Warning

The renowned Russian News outlet also mentioned that “Turkish special services obtained the information about the coup the day before the incident, on July 15, at 4:00 p.m. At 4:30 p.m., MIT deputy chief Hakan Fidan conveyed the information to deputy commander of the Turkish Armed Forces, Yashar Guler. At 6:30 p.m., the head of Turkey’s General Staff, Hulusi Akar, ordered to close the sky above Turkey for all flights, including military ones and prohibit the movement of troops and armored vehicles”.

It added: “Originally, the rebels planned to start the coup on Saturday, July 16, at 3:00 a.m. However, they had to start a few hours earlier because their plans became known to intelligence”.

“Sputnik”: Neither Government Issued a Statement on Claims

“Sputnik” shared the same information as well, with the following addition: “While neither government has issued a statement on the claims, an official statement released by the Turkish army on Tuesday did indicate that some kind of warning was received by MIT.” “Sputnik” also went back to give a little background of the military coup attempt in Turkey: “The failed coup attempt left nearly 300 people dead and over 1,000 injured, and has been blamed on supporters of exiled religious and political leader, and former Erdogan ally, Fethullah Gulen. Ankara has filed a formal request with the US government for Gulen’s extradition”.

“In the wake of the coup attempt, Ankara has launched an unprecedented crackdown on those suspected of being involved in the events of last week. Nearly 50,000 individuals have been targeted as part of a purge, including military personnel, educators, judges, and civil servants.

Earlier on Wednesday, Erdogan declared a three-month state of emergency, “in order to remove this threat as soon as possible.” The Turkish president also suggested that foreign nations may have played a role in failed takeover. “Other states could be behind this coup attempt,” he said. “Gulenists have a ‘supreme intelligence,’ which could have plotted all this. The time will come for all these links to be revealed.” ”

Amid all this talk, we await official statements by the Turkish and Russian governments, and we pose the question: Why hasn’t any of both countries issue a statement on the claims; whether confirming the claims or denying them.