Home » Manchet 1 » What’s happening between Erdogan and the workers? 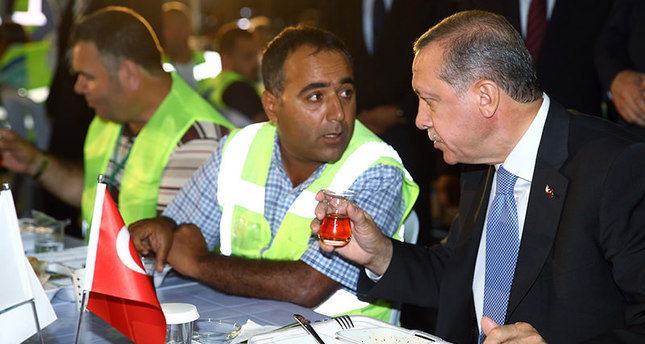 What’s happening between Erdogan and the workers?

While Turkey is ready to work towards restoration of peace and stability in the region together with Russia and Iran, as the Turkish President Recep Tayyip Erdogan said in a telephone conversation with Iranian counterpart Hassan Rouhani on Monday, the Turkish President is attacking workers, in his own way. So what’s happening between Erdogan and workers in Turkey? and where will it lead to?

Restoration of the Turkish foreign relations is extremely important, but what is important as well, is the restoration of the internal situation in Turkey, especially after the coup attempt. It is true that a main confrontation took place in Ankara and Istanbul late on July 16, and the country’s leaders announced later that the coup attempt had been thwarted. According to the latest reports, 208 Turkish nationals died, 100 insurgents were killed and about 1,500 people were injured. But is this a reason to attack workers?

According to Workers.org, the Erdoğan regime is exploiting the failed coup by purging over 12,000 opponents in the military, police and courts. As of July 18, he has arrested 103, or one-third, of the generals and admirals as well as 2,875 ordinary soldiers who followed their orders. Some 8,777 officers from the Turkish Ministry of Interior have been purged, mostly police officers. (CNN, July 18) Some 2,475 magistrates and another 400 prosecutors face charges.

“WallStreetJournal” reported that “Turkey expanded its crackdown within the country Tuesday to nearly 17,000 teachers and administrators, including university professors and deans,” adding that “the prime minister’s office fired 257 people and the religious affairs office 442, according to state news agency Anadolu. Nearly 9,000 people have been detained since the foiled coup on Friday night”.

The coup attempt that represented a threat for Erdogan’s 13 years of dominance in Turkey, seems to have further implications, more than the ones we have just seen.  The Guardian reports that “In the latest developments on Tuesday, the Turkish government fired more than 15,000 employees at the education ministry, sacked 257 officials at the prime minister’s office and 492 clerics at the directorate for religious affairs. Additionally, more than 1,500 university deans were asked to resign”.

It adds that “It followed the firing of nearly 8,800 policemen, and the arrests of 6,000 soldiers, 2,700 judges and prosecutors, dozens of governors, and more than 100 generals – or just under one-third of the general corps. Some 20 news websites critical of the government have also been blocked”.

While the Turkish government says it is carrying out a legitimate security operation to safeguard the country in the aftermath of a failed coup that came close to toppling the elected president, Recep Tayyip Erdoğan in the early hours of Saturday morning, we pose the following question: Is firing workers considered carrying out legitimate security operation forces? will it lead to anything positive in the country? or is attacking the workers just another procedure that will not affect the Turkey internal relations in any way?

Thousands of workers were fired from their jobs, but will this number have any effect amid the Turkish population of 74.93 million, according to statistics in 2013? Most of that population is supports Erdogan, and this was enhanced after the coup attempt, that they are against.

While some sources confirm Erdogan’s domination and power more than ever, especially that “he will win the elections by 60% if it happened at the moment”, as the sources say, will he be powerful inside Turkey, or will he be less focused on his foreign relations, and focus more on what is happening inside Turkey?… The upcoming days will answer these questions.