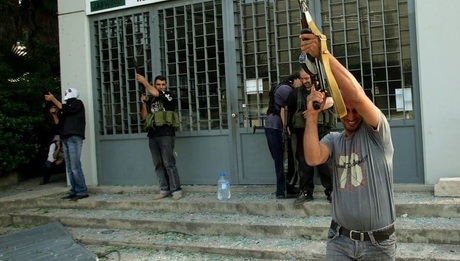 Whether it’s joy, political passion or grief, for many Lebanese, there’s only one way to show it: by lifting a gun and firing off rounds into the air.

But the deadly practice, a tradition in many Arab countries, has attracted new scrutiny and police attention following a spate of deaths and serious injuries in incidents involving indiscriminate gunfire.

“It felt like a fire had burst into my chest,” said 15-year-old Hussein Azab, whose chest was pierced by a bullet fired during celebrations after municipal elections in May.

One person was killed and three others were wounded in celebratory gunfire that day.

The following month, a child was killed and a woman wounded in separate incidents by people firing guns to celebrate official exam results.

“I was with my mum, my brother and my aunt on our way to my grandfather’s house at around 8:30 (pm) when I was hit,” said Azab, who was shot in southern Beirut.

“The blood started pouring out of my chest and I was very afraid. I thought I would die,” he said, struggling to recount his ordeal as he gazed at the 15-centimetre (six-inch) scar running down his chest.

The experience has also scarred him psychologically, leaving him afraid of loud noises, particularly fireworks.

“My life changed. I’ve become irritable and afraid all the time. I can’t sleep, and if I do, I wake up from panic attacks,” he said.

Hussein’s mother Wafaa was angry and tearful. “They were celebrating winning elections while we were crying blood.”

With the deadly incidents making headlines, Lebanon’s police force says it has made more than 130 arrests of people firing in the air since early June.

A Lebanese man firing in the air during the funeral of Army Lieutenant General Nureddin al-Jammal, killed in fighting in eastern Lebanon, at a Sunni Muslim mosque in the Beirut neighbourhood of Tarik al-Jadideh

It is also encouraging people to report shooters via a special hotline.

“Civilians must come together to stop shooting and not be silent about the shooters,” he told AFP.

“This isn’t an issue of tradition. It is a crime that leads to death.”

Officially, celebratory gunfire is illegal in Lebanon, where firearm ownership remains widespread more than two decades after the end of its 1975-1990 civil war.

A 1959 law states “anyone firing in residential areas or in a crowd, whether their gun is licensed or not” faces up to three years in prison or a fine.

But the fine has not increased since it was set at 500 Lebanese pounds in 1959, an amount now worth just 60 US cents.

Shopowner Qassem, a resident of the southern Lebanese port city of Sidon, is undeterred by the legislation.

He first fired into the air 14 years ago, to celebrate the birth of his daughter.

“It was our first joy and I shot about 75 bullets into the air. I started firing every year on my daughter’s birthday, which is Lebanese Independence Day,” he said.

He insisted he takes precautions before firing, refraining from shooting in packed residential streets and asking those around him to step away before he lets loose.

In a bid to deter people like Qassem, one member of parliament has submitted a draft law increasing the jail time for such gunfire to up to 20 years, and the maximum fine to the equivalent of $12,500.

The bill has received support from various political parties, but it has yet to be voted on because Lebanon’s parliament is paralysed and not meeting to legislate.

In the interim, the powerful Shiite militant group Hezbollah has taken the initiative to curb indiscriminate shooting in neighbourhoods under its control.

The issue is more pressing for the group because its supporters often fire bursts of bullets into the air when Hezbollah chief Hassan Nasrallah gives one of his frequent speeches, or during the funerals of fighters killed in the Syrian conflict.

Nasrallah himself has publicly criticised the practice, telling his supporters in June that celebratory gunfire “will be enough for us to expel someone from our ranks”.

The decision would apply to everyone, even senior Hezbollah members “who have been fighting Israel for 30 years”, he warned.

“I know that firing weapons is an expression of joy or sadness, but the sky has never once swallowed a bullet,” he said.

Whether it’s joy, political passion or grief, for many Lebanese, there’s only one way to show it: by lifting a gun and firing off rounds into the air

Exacerbating the issue is the sheer number of weapons in Lebanon.

An estimated four million guns are licenced as personal firearms in Lebanon, which has just four million citizens, according to Abi Allam.

“Some households don’t own any weapons — others own dozens,” he said.

Abi Allam urged families, schools, religious figures, civil society and the state to combine their efforts and work together to put an end to the practice.