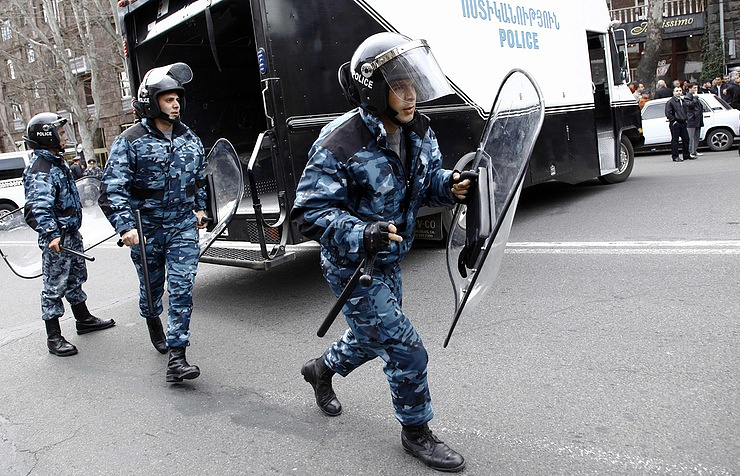 A group of oppositionists has seized a regiment of the police patrol and inspection service in Yerevan and is demanding the Armenian authorities’ resignation, the republican police press office reported on Sunday (July 17).

There has been no official report about the incident. Armenian law-enforcers say several people were hurt in the incident.

The supporters of oppositionist Zhirair Sefilyan who was arrested on June 20 and is accused of organizing a criminal group have announced about “their intention to change the situation in Armenia” by way of an “armed uprising,” according to the statement released by the opposition group.

“We have already seized one of the basic police bases in Yerevan and are controlling the Erebuni quarter in the south of the Armenian capital, the oppositionists say.

Government bodies are working in a normal regime

Armenian government bodies are working in a normal regime and the police are duly performing their functions for protecting public order, the Armenian National Security Service said in a statement on Sunday.

“Government bodies are working in a normal regime while law enforcers are duly performing their functions for protecting public order and ensuring state security,” the statement said.

“Today a group of armed persons penetrated the territory of a regiment of the Armenian patrol and inspection police and is holding captive people there under the threat of violence,” the statement said.

“Simultaneously, their supporters are periodically spreading false information through the media and social networks about the start of an armed uprising and the seizure of buildings,” the statement says.

Negotiations are currently under way with the armed persons “for their peaceful surrender to the Armenian authorities,” the National Security Service said.

Armenian special services have warned that any unlawful actions will be immediately terminated while the persons committing them will be neutralized and be held liable, the statement said.