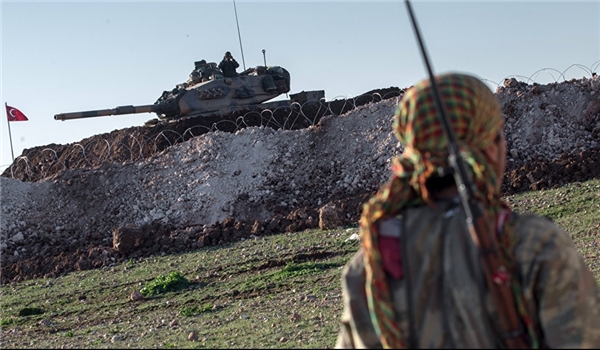 Informed sources said that the Turkish intelligence agents, who have been training Nouralddeen al-Zinki terrorists in Northern Syria, have been ordered to leave the battlefields in Aleppo due to the Syrian government forces’ increasing advances and meantime lack of unity among militant groups.

“Suicide attacks of al-Nusra front and Nouralddeen al-Zinki on the government forces’ position to reopen Castillo supply line to Northern part of Aleppo city have thus far failed and the Syrian army forces’ advances in different battlefields in Northern Aleppo have continued,” the sources said.

“On the other hand some of the terrorist groups have no intention to partake in Aleppo battles against the government forces. All these have forced Turkey to start evacuating its trainers and intelligence officers from Aleppo,” they added.

“Over 500 terrorist have been killed in the last four days in Aleppo. Ahrar al-Sham is accusing the Free Syrian Army and al-Qaeda-affiliated groups of treason through refusing to send more fighters to battlefields in Aleppo. Turkey and other foreign backers of terrorist groups have come to this conclusion that their affiliated terrorist groups in Aleppo can not resist against the waves of government forces in Aleppo city” the sources went on to say.

On Thursday (July 15), a spokesman of Ahrar al-Sham underlined that the terrorist group was not participating in clashes in al-Malaah farms in Northern Aleppo against the Syrian army and popular forces, saying those who take part in this battle were doomed to experience crushing defeat.

Writing on his twitter page on Wednesday, Abu Yousef al-Muhajer voiced surprise at certain groups’ participation in Malaah battle, and said Ahrar al-Sham did not send its forces to the region given the weak possibility of victory against the government and popular forces and the fear of sustaining a major toll and damages.

Media sources said that terrorists of Nouralddeen al-Zanki Movement and al-Nusra Front and a number of the Free Syrian Army (FSA) militants participated in the battle.