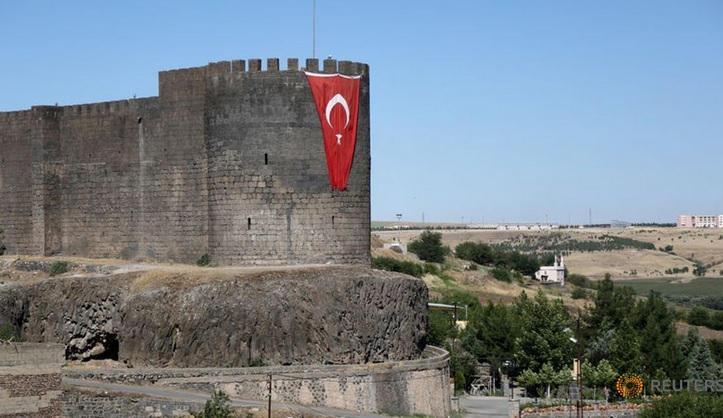 When the United Nations inscribed the Roman-era walls of this mainly Kurdish city on its World Heritage list last year, it crowned a decade of efforts to rehabilitate a war-torn region.

People sit at the historical Hasan Pasa Bazaar in the Sur district of Diyarbakir, Turkey July 11, 2016

Within weeks, a ceasefire with Kurdish militants in southeastern Turkey shattered, unleashing some of the worst fighting in a three-decade conflict and laying waste to swathes of Diyarbakir’s ancient district of Sur.

Sur’s ruin casts a pall over this week’s World Heritage Committee meeting in Istanbul, which lists sites for the U.N. Educational Scientific and Cultural Organisation (UNESCO).

“In a year, we went from UNESCO (listing) … to destruction so complete, there is no chance of return,” said Nevin Soyukaya, who helped draft the bid as head of the city’s heritage office.

Hundreds were killed and thousands displaced in security operations in Sur, the last of which ran for three straight months until March. Tanks battered its warren of medieval streets to root out rebels who dug trenches and laid explosives.

More than 800 buildings in the 7,000-year-old city were razed, said Soyukaya. The damage became irreversible when rubble was bulldozed and dumped at the nearby Tigris River, she said.

Residents look at buildings which were damaged during security operations and clashes between Turkish security forces and Kurdish militants, in Sur district of Diyarbakir, Turkey May 22, 2016.

Diyarbakir is the best-known of cities across six provinces damaged during operations. The government says 6,000 destroyed buildings will cost 1 billion lira (US$345 million) to replace.

“We will not only cleanse the cities of terrorists but, through urban regeneration, (eliminate) conditions that have allowed them to act,” Erdogan said after the operations in Sur.

The last year of fighting with the autonomy-seeking PKK has claimed thousands of lives. Erdogan has ruled out a return to peace talks until the PKK, deemed a terrorist group by Turkey, the United States and the European Union, lays down arms.

Fighting drove out 20,000 people who wonder if they can ever go back. A government minister invited them to move elsewhere.

Beritan Ates, 19, grabbed just her school bag to return to high school in December, leaving behind her parents and two adult sisters in the house where she was born. They believed the lockdown would only last days and stayed to guard the house.

“After 50 days, they had no water or electricity and wanted to leave, but a corridor was not opened,” she said.

Her mother, Fatma, 55, was shot after stepping outside for prayer ablutions, one of 400 or more civilians killed in the region, rights groups said. Her father and a sister were jailed.

Authorities say only “terrorists” remained after a curfew was imposed and say militants blew up power lines and other infrastructure. The state expropriated 6,292 parcels, or 80 percent of Sur, in March pledging an “authentic rebuilding”.

An excavator is seen next to buildings which were damaged during security operations and clashes between Turkish security forces and Kurdish militants, in Sur district of Diyarbakir, Turkey May 22, 2016.

A video in April that showed children playing in a computer-generated Sur promised: “Families will find peace again.”

A local official said tenders to rebuild a mosque and church were held but declined to give details. Sur was initially slated for redevelopment in 2012, part of a nationwide construction push, but local protests forced Ankara to suspend the plans.

“The government warned it would flatten Sur and build a new city in its place with apartment blocks and shopping malls,” said Zulfu Livaneli, a Turkish novelist, filmmaker and composer. He quit a 20-year role as a UNESCO goodwill ambassador in protest at the damage done to Sur and alleged rights abuses.

“It sees an empty space as an opportunity for profit.”

Before the fighting flared anew, the 5-km (3-mile) walls circled 1,200 historic sites, including caravanserais, churches and a synagogue, built with the stones of older structures.

As violence ebbed over the last decade, the municipality restored mansions and mosques, and in 2011 Armenians with roots in Diyarbakir re-opened St Giragos, one of the Middle East’s largest churches, winning a Europa Nostra award.

“I feel like a helpless father watching his sick child die,” said ex-mayor Abdullah Demirbas, who worked to transform Sur into a major tourist draw. “This wasn’t just about fixing up old spaces but embracing pluralism and reconciling with our past. We showed different faiths can live together in the Middle East.”

UNESCO recognition of the fortress and gardens ranked Diyarbakir with Taj Mahal in India and Egypt’s Giza pyramids.

UNESCO is grappling with destroyed heritage in war zones from Syria to Congo and wants it treated as war crimes.

Activists who say UNESCO has been quiet on Sur’s ruin are staging counter-forums around this week’s meeting in Istanbul.

“The dilemma is (UNESCO’s) support and funding come from governments, so political pressure renders such organisations ineffective,” said Livaneli.

“We are approaching this issue with extreme sensitivity and do not want see any harm to the site,” she told reporters.

World Heritage Centre director Mechtild Rossler would not speak specifically on Sur but pointed to a report expressing concern and welcoming steps by the state to prevent more damage.

Big stretches of Sur are still off-limits, and police man checkpoints behind sandbags and Turkish flags.

Visitors who have been allowed entry say the former Armenian neighbourhood where Ates’ family lived looks as flat as a runway. St Giragos was seized with other properties, unnerving Turkey’s tiny Armenian community which has sued for its return, said Vartkes Ergun Ayik, the church foundation’s president.

A 500-year-old minaret pockmarked by gunfire is visible behind a police barricade. Lawyer Tahir Elci, an outspoken peace campaigner, was shot there by unidentified gunmen in November while protesting against damage to the Ottoman-era monument, spooking conservationists.

Parts of the black basalt fortifications that defended Diyarbakir’s people and monuments for centuries during sieges by Persians, Arabs and Mongols “have been ravaged,” said Meral Halifeoglu, professor of architecture at Dicle University.

Within the walls, structures “could not withstand today’s weapons … Never has the destruction, the loss been so great,” she said, warning that barring returns violated UNESCO tenets.

The Turkish official said residents will go back. “The ultimate aim is for everyone to return to their homes,” he said.

Sur was once a haven for exiles. Fatma Ates fled here when war with the PKK roiled the countryside in the 1990s.

“Her house was burned down once. My mother said she would not allow it again,” said Beritan. Her vigil failed.

Beritan and her brother now live in a rented apartment in a tower block on the outskirts of town.