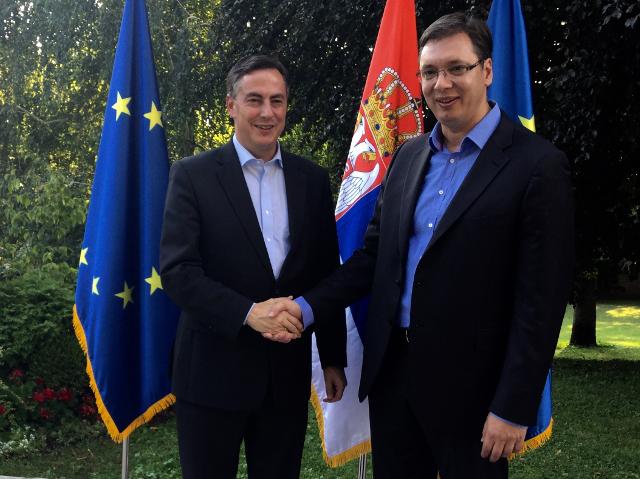 The German MEP from the CDU party, who is currently visiting Belgrade where he late on Wednesday (July 13) met with PM-designate Aleksandar Vucic, further stressed that the task of Serbia was to align its security and foreign policy with that of the EU “also when it comes to Russia.”

“Serbia has traditionally strong economic, social and cultural ties with Russia. However, Russia unilaterally changes European borders in order to try to expand its influence and expand its control over parts of territories of neighboring countries. This is one of the reasons, why Serbia needs to make strong efforts in aligning its foreign and security policy to that of the EU, including the policy on Russia,” McAllister told the website “European Western Balkans.”

Ahead of a conference in Belgrade, dubbed, “The European Union’s Global Strategy on Foreign and Security Policy and the Western Balkans,” he added that he “course recognizes Serbia’s very good and fruitful cooperation with NATO and encourages Serbia to deepen that relation.”

“Serbia not seeking NATO membership is not an issue. The European Union has six member states – Austria, Cyprus, Finland, Ireland, Malta and Sweden – that are not a member of NATO,” he said.

Asked to comment on “a significant decline in support for EU membership in Serbia” and “the threat of Russian influences,” McAllister replied:

“The European Union has to become even more visible and vocal in the Western Balkans. The floods in 2014 are a good example. Serbia’s urgent request for high capacity water pumps and operational teams has been channeled through the European Commission’s Emergency Response Coordination Center and was answered positively within a matter of hours. Until the end of 2014, the European Union had spent 172 Million Euros for humanitarian and emergency assistance and reconstruction in the flood areas. I am not aware of any support like this from Russia. These facts, however, are not perceived sufficiently among the Serbian public.”

As for “the biggest threats for the Western Balkans countries” at this time, and whether this included “abandoning of the policy of enlargement by the EU” and whether there was “something else,” the German politician said.

“The region is confronted with major tasks. The strengthening of the rule of law, the fight against corruption and organized crime, the stagnating socio-economic development, the involvement of Civil Society Organizations in the democratic process, the deteriorating situation of media freedom and the consequences of unresolved bilateral issues to just name a few. However, the countries of the Western Balkans have in the past experienced a process of political, institutional, legal, social and economic reform and transformation, with the objective of bringing the country into the European Union. This process is far from being complete. But sustainable change takes time and I am certain that Serbia and the other countries in the Western Balkans will continue on their respective paths towards the European Union.”

When the interviewer said that Serbia’s commitment towards EU accession “has been continuously praised, especially the progress made under the Vucic administration” but that the country is “regressing regarding crucial internal matters, such as the constricting of democratic and media freedoms,” McAllister noted that he was “aware that many Serbs fear that certain policy areas are not addressed properly or are overshadowed by others,” adding:

“This is not the case. All 35 chapters are equally important. In order to join the European Union, 35 chapters have to be opened and closed. In this context, I welcome that chapters 23 and 24 will be opened at the Intergovernmental Conference next week. This is well deserved and overdue. As a direct consequence, Belgrade will establish a track record in important areas such as justice, internal security, fundamental rights, the fight against corruption and organized crime.”

“Germany did not change its position on Serbia. On the contrary, Germany has been very consistent in its policy. Chancellor Merkel is in a close exchange and open dialogue with Prime Minister Aleksandar Vucic and, among other means of support, has initiated the Berlin process in 2014. As the German Bundestag is concerned, the relevant document is the 2013 Bundestag resolution on Serbia. It puts a special emphasis on the normalization process between Kosovo and Serbia and will continue to shape Germany’s approach with regard to Serbia’s accession negotiations.”

Asked what “a comprehensive normalization of relations between Serbia and Kosovo” means, McAllister said that “the dialogue with Kosovo is closely linked with the EU accession process of Serbia.”

“The engagement in normalizing relations with Kosovo is most welcome and some progress has been made in this respect. The First Agreement on the Principles of Normalization of Relations of April 2013 was a milestone which Serbia as well as Kosovo can still be proud of. However, this agreement was concluded three years ago and is yet far from being implemented. In substance, what is requested from Serbia is a continued engagement towards a visible and sustainable improvement in relations with Kosovo. This process shall ensure that both can continue on their respective European paths, while avoiding that either can block the other in these efforts.”

When it comes to preventing countries from blocking each other’s EU accession over bilateral disputes, McAllister said that “(EU) enlargement is about bringing peace, stability and prosperity to the Western Balkans region,” while “a stable Serbia will be beneficial for the entire region.”

“Serbia has to align to the acquis communautaire, the accumulated legislation, legal acts, and court decisions which constitute the body of European Union law. Bilateral issues that do not belong to this body should be resolved bilaterally,” he said.

He was then asked whether “the growth and expansion of the far right movements is an important threat for Serbia.”

“It will be indeed a change for the Serbian democracy that representatives from the far right are now represented in the Narodna Skupstina (National Assembly). It is important that all democratic forces and the civil society explain to the Serbian people that radical politicians don’t offer tangible solutions. They are backward-looking and play with people’s fears,” said McAllister.

As for Brexit, the German MEP said: “The outcome of the EU referendum in the United Kingdom should not have any effect on the EU’s determination to proceed with the enlargement process and to support the reform agenda in the countries involved. However, with the United Kingdom leaving the European Union, the countries of the Western Balkans are losing a key advocate of enlargement.”