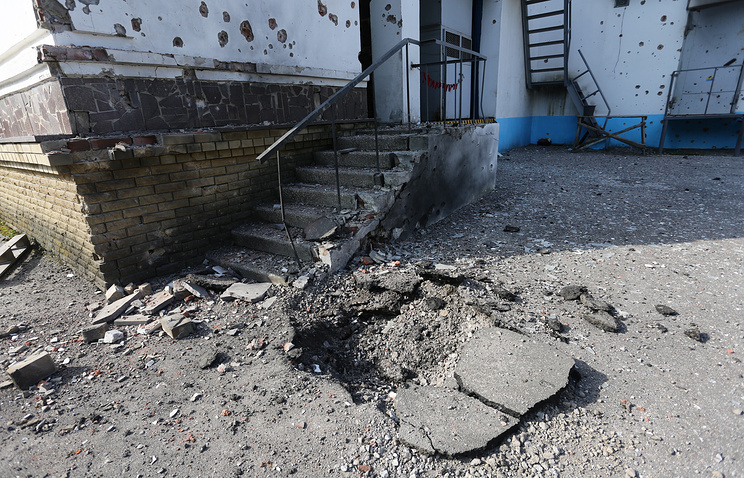 The Zaitsevo settlement near Gorlovka, Trudovskiye and Aleksandrovka in the west of Donetsk, the Kominternovo and Sakhanka villages in the south of DPR, the industrial zone are near Yasinovataya, as well as the Volvo-Center area in Donetsk came under fire opened by Kiev’s security forces.

Members of the Contact Group on settling the situation in east Ukraine agreed on observing ceasefire starting from April 30. However, the self-proclaimed Donetsk and Lugansk republics (DPR and LPR) and Kiev forces continue accusing each other of violating the ceasefire regime in Donbass.

On June 29, the Trilateral Contact Group on the settlement of the situation in eastern Ukraine reached an agreement on disengagement of forces in the settlements of Petrovskoye and Zolotoye. Under the agreement, each party is to pull out its forces two kilometers from the contact line. Vladislav Deinego, the chief negotiator for the self-proclaimed Lugansk People’s Republic, said the agreement envisages complete demilitarization of this area.

On July 6, Kiev’s representative in the Contact Group’s political subgroup Olga Ayvazovskaya said Ukraine thinks local elections in the self-proclaimed Donetsk and Lugansk People’s Republics (DPR and LPR) are not likely to be held within 2016. Verkhovna Rada (Ukraine’s parliament) Speaker Andrey Parubiy said earlier that there are no prospects for positive consideration of the draft law on Donbass elections at the Ukrainian parliament.

The Trilateral Contact Group on Ukraine comprising senior representatives from Russia, Ukraine and the European security watchdog OSCE on February 12, 2015, signed a 13-point Package of Measures to fulfil the September 2014 Minsk agreements. The package was agreed with the leaders of the Normandy Four, namely Russia, Germany, France and Ukraine.

The Package of Measures, known as Minsk-2, envisaged a ceasefire between Ukrainian government forces and people’s militias in the self-proclaimed republics in Donetsk and Lugansk starting from February 15 and subsequent withdrawal of heavy weapons from the line of engagement. The deal also laid out a roadmap for a lasting settlement in Ukraine, including local elections and constitutional reform to give more autonomy to the war-torn eastern regions. To spur up the work of the Contact Group, four working subgroups were set up within it on four key aspects of the Minsk agreements, namely on issues of security; on political issues; on issues of prisoner exchange and refuges; and on social, humanitarian and economic aspects.