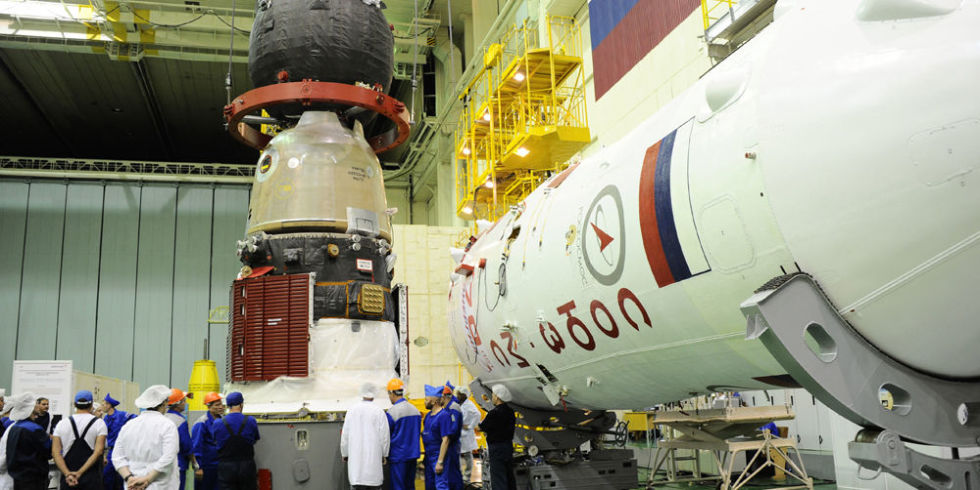 When a fresh Russian-American-Japanese crew blasts off toward the International Space Station on Wednesday evening (July 6), the team’s first task will be to try out a new version of the legendary Soyuz spacecraft. Russian pilot Anatoly Ivanishin, NASA astronaut Kate Rubins, and Japanese flight engineer Takuya Onishi will take a two-day test drive aboard the Soyuz MS-01 spacecraft before docking at the space station on Friday. There, the new Soyuz will be serving as a lifeboat for its passengers for four months before leaving and landing via parachute in the steppes of Kazakhstan this coming November.

Because the Soyuz has been a reliable workhorse for decades (that is, the ship ain’t broke), Russian engineers introduce changes in small and incremental steps. So don’t look for obvious body shape changes or major systemic redesigns. Still, careful observers will notice a few new exterior details.

Most of the upgrades replace obsolete electronic accessories, improve crew safety, and give pilots and mission control more flexibility in flying the ship. Before getting certification to get onboard Soyuz-MS, most new systems were already flight-proven on unmanned Progress cargo ships. Here is what’s under the hood of the new Soyuz MS flavor, which replaces the Soyuz TMA-M variant after its 20 missions:

Surprisingly, only now does the Soyuz get true satellite navigation. Although sat nav is a common sight in cars on Earth, Soyuz until now relied on six ground stations for precise measurements of its orbital path. With Soyuz-MS, engineers will do away with a bulky system in favor of a new “Apparatus for Satellite Navigation” or ASN-K, which can talk to GPS satellites and their Russian counterparts known as GLONASS. The satellite navigation will locate the Soyuz descent capsule on the ground after landing, too.

Perhaps, the most important change pertains to the ship’s famous automated rendezvous system known as Kurs (“course”), which has guided Soyuz to its destinations in space since the mid-1980s. Though the Kurs proved exceedingly reliable over the years, many of its electronic components are now out of date. They’re also produced in Kiev, Ukraine, with whom Russia has been at a virtual state of war for two and a half years. Not surprisingly, Soyuz-MS will introduce the domestically developed Kurs-NA system. In addition to resolving the obvious political problem, the new rendezvous hardware brings a higher level of computerization while being smaller, lighter, and less power-hungry.

That last bit is especially important because many new systems on Soyuz come with an increased appetite for power, pushing the overall electricity consumption on the spacecraft to its limit. To address the deficit, engineers squeezed an extra battery alongside four existing ones in the ship’s aft section. They also fitted more cells on the existing solar panels.

Soyuz-MS will now sport a powerful communications system, dubbed EKTS, which can connect the crew to mission control in Korolev near Moscow via satellite. Previously, cosmonauts and astronauts on Soyuz could talk to their peers on the ground only when in direct view of ground stations on the Russian territory. The large antenna array of the EKTS system “on the roof” of the Soyuz-MS is the most prominent new feature on the ship’s exterior. Thanks to three available Russian Luch-5 satellites, the crew will be able to stay in touch with mission control around 83 percent of the time each day. The Soyuz will be also able to communicate via American TDRS and European DRS satellites.

In response to long-standing concerns from NASA, the habitation module of the Soyuz-MS spacecraft—which is essentially a thin aluminum bubble—is now reinforced with an extra layer designed to protect the crew from meteors and from ever-growing menace of space junk. Lastly, Soyuz-MS gets new digital TV, which promises to give viewers better quality live pictures from orbit, and the new SZI-M “black box” to record voice and data during the mission. Because it is installed under the pilot’s seat in the descent module inside a shock-absorbent case, SZI-M should withstand impacts with a speed of up to 150 meters per second and should be available for reuse on as many as 10 flights.

Following this upgrade, the nearly-50-year-old Soyuz is expected to remain in its role until mid-2020s, when a next-generation Russian spacecraft will be ready at last, and it’ll probably use some of these new Soyuz-MS features.